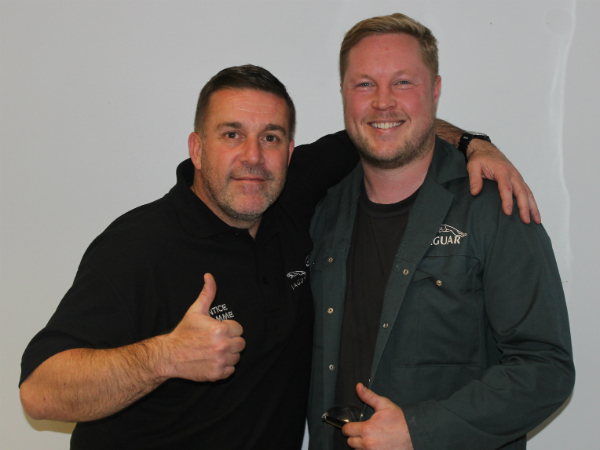 When it comes to being a JLR apprentice, there are two things we look for in our ideal candidate- enthusiasm and passion for working for our world-class brands. Age is just a number. Meet Tony Halt. Tony, 43, is one of our new apprentices, studying Advanced Manufacturing, Level 3. He has been talking to us about what inspired him to take the “route” into engineering in his forties and join our class of 2018/19.

Tony, said: “I’ve been working in engineering roles for the last 25 years but because I didn’t have any formal qualifications, I found it hard to move up the career ladder.  I actively sought out courses and apprenticeships but my managers kept telling me I was ‘too old’.

But Tony refused to let that stop him and that’s when he discovered the JLR Apprenticeship Scheme.

“My cousin works in AME at Halewood and told me to apply as there was no upper age limit on apprenticeships.  I had my first child, Bella, three years ago and she has made me more determined to succeed, so I handed in my application and hoped for the best.  I couldn’t believe it when I got it. Not only would I be getting the highest level of training, which was paid for, I would be working for a brilliant company that I admired.  It’s completely changed my life and I hope it inspires other people my age and shows them that you are never too old to start learning.  There’s not a night that goes by that I don’t think to myself, ‘you’re a lucky lad, Tony.”

Rob Kenny, 32, has worked at JLR since 2006 and joins Tony as a first year apprentice in Advanced Manufacturing.

He said: “I’ve really progressed at JLR over the last 12 years and have learnt lots of skills but now feels like the right time to take on something new. I’ve gained lots of experience so feel like I have more to offer the company, now, than I did when I was 17. I’m so grateful to have this second chance at learning and it shows how invested JLR is in its employees.”

Talking about the other apprentices, Rob added: “We’ve only known each other a few weeks but it’s like a big family- I think they see me and Tony as the dads though! We’ve been helping them with practical tasks and they have supported us with some of the more academic work- it’s a great group.”

0
Taking to two wheels to save lives