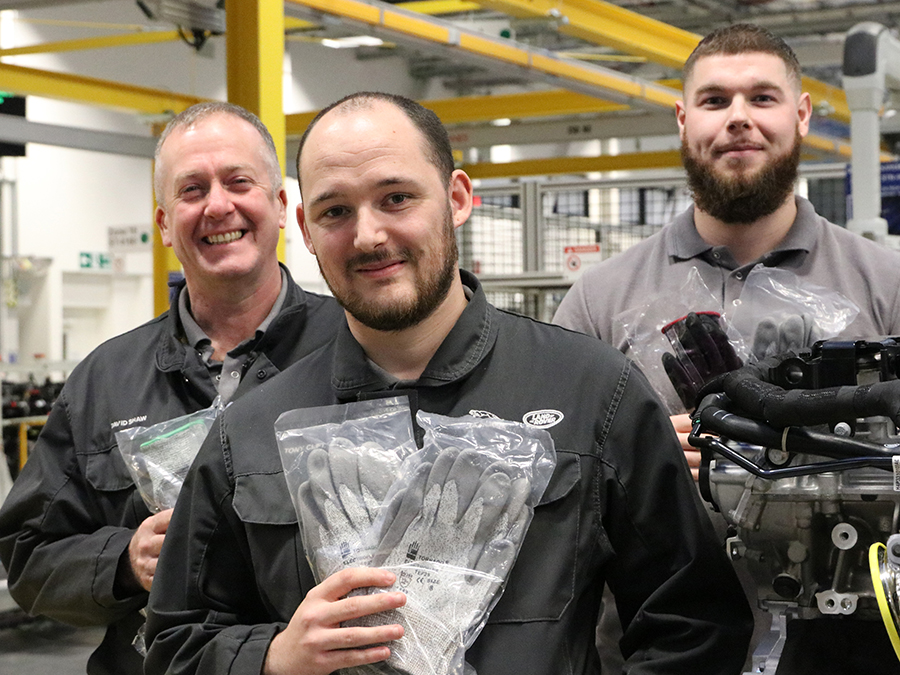 Eliminating waste and cutting safety glove misuse has led to a new system being implemented at the EMC. It’s seen the creation of a Team Improvement Circle in the facility’s petrol assembly hall and has the potential to save upwards of £70k a year.

The project has brought about full visibility and order control for safety gloves in both the petrol and diesel assembly halls, it’s also helped with waste management streams, ensuring that only safety gloves at the end of their life are disposed of.

Jason Evans is the TIC coach on the project. He said: “In the early stages of the project we did a stock take of safety gloves and found that we held £13.5K in our hall alone, which was far more than we should have. We also found that people didn’t really have an idea about how long a safety glove could be used for. Some were being disposed of as single use, which was unacceptable, as they could safely be worn for two days or more dependent on process, before needing to be replaced. This was at a massive cost to the business, so we set ourselves the challenge of coming up with a solution to reduce safety glove consumption by 30%.

“The project identified that there needed to be a system in place, where team leaders took responsibility for ordering and managing the distribution of safety gloves. They were accountable to the number of gloves and types of gloves they needed for their zone, which as a result meant that only gloves that were required as part of their processes in-zone were ordered. This helped us to manage the stock of gloves and realise that we had an overstock of gloves that we rarely used, against a stock of others that were used more frequently.”

Prior to the new system being implemented the team had to first understand the base line conditions. It was found that over an eight week period, on one shift in petrol assembly alone, there was an average 3.11 glove consumption per head, equating to a cost of £9.4k. There was little accountability, as anyone with an IESA account could order gloves and it was easy just to order new ones without thinking about the financial implications, or investigating why gloves were needed so frequently.

Ben Egan is the TIC circle leader. He engaged the expertise of TIC veteran and petrol assembly team leader Tony Clift and Customer Focus Centre kaizen champion Dave Shaw to look at the project. It was an area they all felt passionate about.

Tony said: “There was no science behind the existing system, which was a challenge we needed to address. We approached a colleague Simon Sims, who has great technical knowledge, he was our tech guru on the project and helped us to develop a master scheduler and order system that would track orders.”

The team originally wanted to implement a vending machine system, similar to one that had been used previously in diesel assembly, as a direct result of a TIC last year. They were inspired by the idea and wanted to push it further, creating a new concept and developing a more controlled process.

Jason said: “We put a proposal forward to use a similar system and took it into a meeting with senior managers. We were emphatically told no, which was a bit disheartening. However, it was explained that this system was deemed ineffective at it didn’t allow full accountability of the stock. Anyone could go and get gloves at any time on a free vend. So we went back to the drawing board.”

Tony said: “The onus shifted to managing stock centrally based on the requirements of each team. Team leaders are required to pre-order

“In just eight weeks of implementation, we’d gone from 3.11 glove consumption to 1.64 per head in the petrol assembly hall, a clear sign that the new system worked. In a little over a month we’d saved £10k in stock, as we were also recirculating gloves that weren’t used to areas of the facility that did need them. This saved us ordering more.

“We estimate that the new system has the potential to save £50k over a year in the petrol and diesel assembly halls alone, although once the system is rolled out to the rest of the facility that could easily rise to £70k. We’re now looking for champions to take this forward in all areas of the business.”

The team are also looking forward to sharing their idea with the wider facility, as part of their Team Improvement Circle project and perhaps even internationally at the Global Convention.

“In just eight weeks of implementation, we’d gone from 3.11 glove consumption to 1.64 per head in the petrol assembly hall, a clear sign that the new system worked. In a little over a month we’d saved £10k in stock, as we were also recirculating gloves that weren’t used to areas of the facility that did need them. This saved us ordering more. 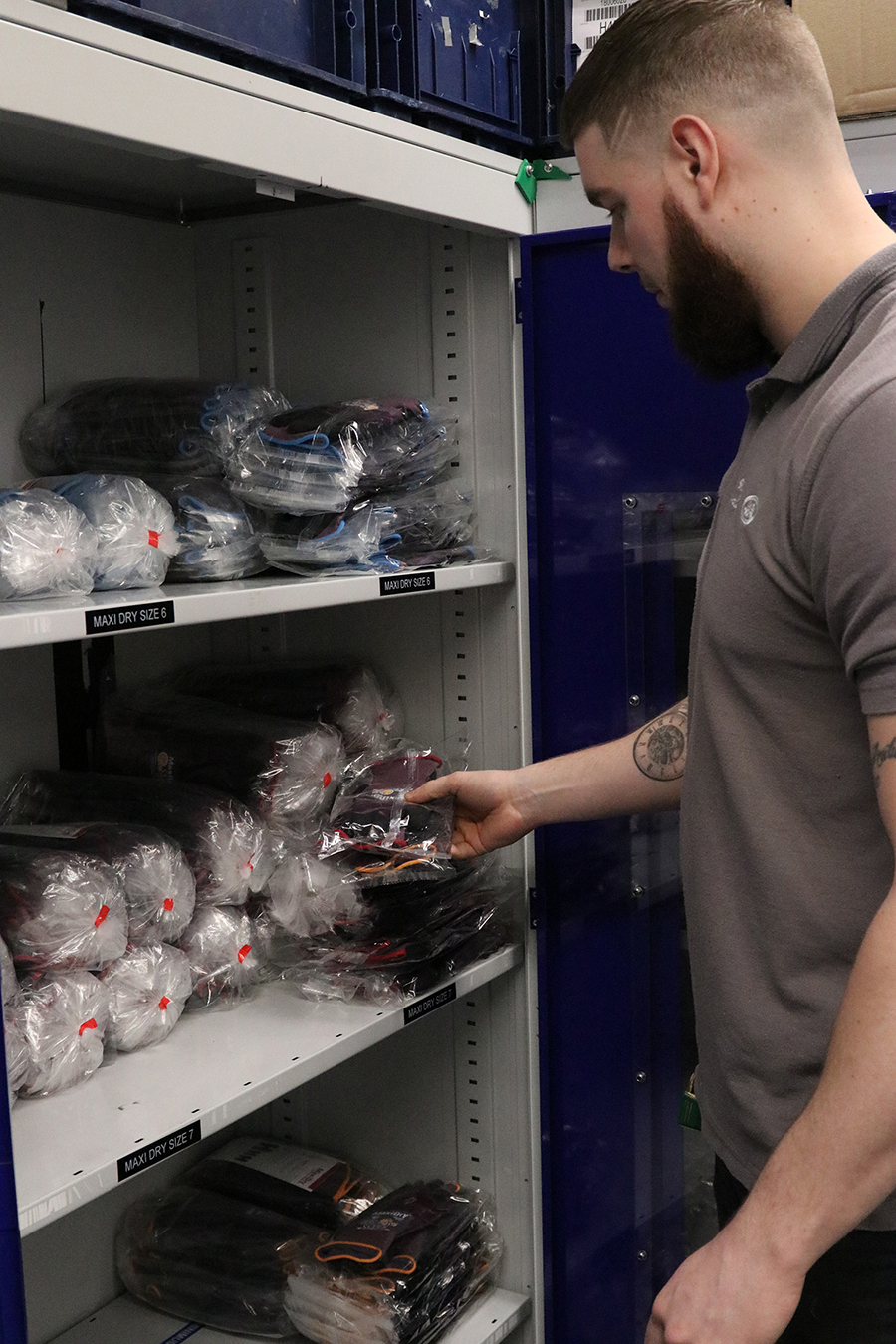 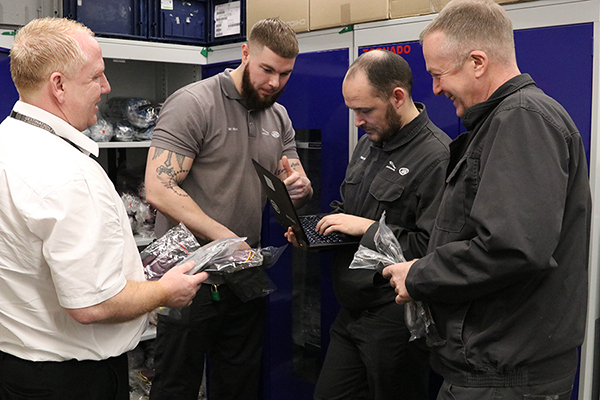