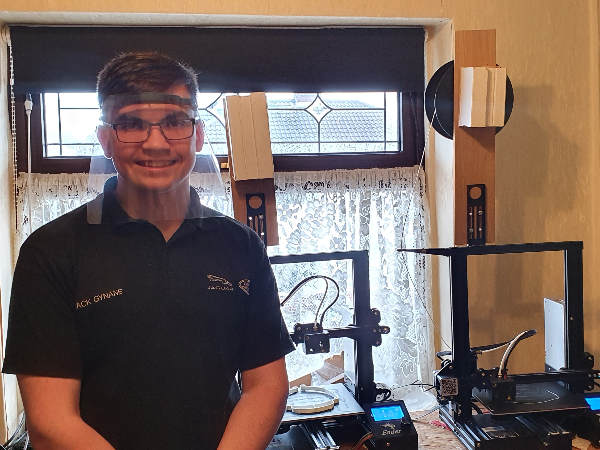 A LITTLE BIT OF KINDNESS GOES A LONG WAY…

This Friday marks World Kindness Day (13 November), a day that is dedicated to making the world a better place by celebrating and promoting kindness.

Kindness is something which our team at Halewood has shown in abundance, especially this year, where we have seen employees from all parts of the business selflessly volunteer their time during the coronavirus pandemic, to help some of the most vulnerable people in our local communities.

One of these “Halewood Heroes” was mechanical engineering apprentice, Jack Gynane. After his apprenticeship was put on hold in March, Jack used his free time to make protective visors and ear relievers for frontline NHS staff.

Jack did this all from his own bedroom using 3D printers. During this time he delivered over 1700 items of PPE to hospitals including The Royal Liverpool, Whiston and Aintree hospitals, as well as numerous care homes across Merseyside.

Last week, On Track got in touch with Jack to see how he was getting on.

Jack said: “The last six months has been a whirlwind. At one point, I was making around 50 visors a day- all from my bedroom!”

“The demands were particularly high towards the beginning of the crisis when there was such a chronic shortage of PPE. It wasn’t an easy task but it was worth it when I got to see the big smiles on people’s faces who seemed genuinely overwhelmed by what I was doing.”

He added: “I wasn’t the only one, there were lots of people at Halewood doing similar things or volunteering their time and I feel really proud to be part of that whole team effort.”

As well as making and delivering PPE, Jack’s good will has extended even further as he has personally donated £800 to two local charities. This includes £300 to The Big Help Project, which is part of Knowsley Food Bank and £500 to The White Chapel Centre, a leading homeless and housing charity in the Liverpool region.

Jack, who is a former Air Cadet, is also planning to donate money to his local squadron in Huyton once it returns to normal order next month.

Jack’s story is a little reminder of how a little bit of kindness goes a long way and we will be thinking about Jack and all our other ‘Halewood Heroes’, who have been part of this incredible volunteering effort over the last six months, as we come together to mark World Kindness Day at Halewood this Friday.