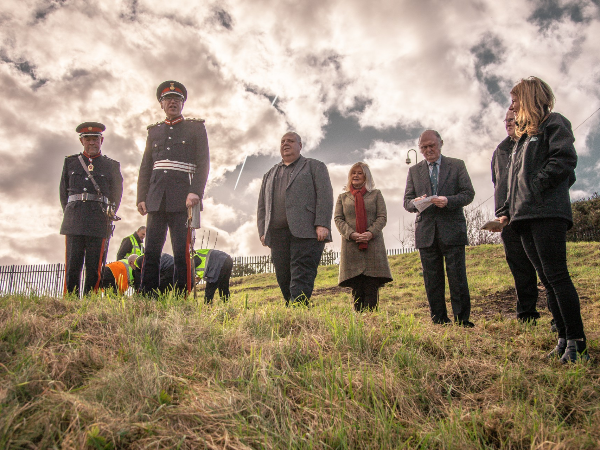 Last week we have certainly been feeling the love at Halewood thanks to the incredible work delivered by our Platinum Planting Project volunteers. They have created a spectacular on site orchard to mark the Queen’s Platinum Jubilee year, which has sustainability, our people and community at the heart.

Last Wednesday we were also joined by “royalty” as we were visited by the Lord-Lieutenant of Merseyside – Mark Blundell, who is the Queen’s personal representative in the region, who came to site to officially unveil the plaque to our new Queen’s Green Canopy Orchard.

The orchard was planted by our employees, who volunteered from all parts of the factory and came together as one Halewood team to celebrate the Queen’s spectacular 70-year service on the throne.

This new orchard and sustainable eco-system is made up of 70 trees, a mixture of apple, pear and plum, one for each year of Her Majesty’s reign. It will also be used as used a place of wellbeing and reflection on site for employees, for many years to come.

Our planting project was in partnership with the Queen’s Green Canopy (QGC) - a nationwide tree planting initiative created to mark the Queen’s Platinum Jubilee in 2022, which invites people from across the United Kingdom to “Plant a Tree for the Jubilee”.

They were greeted by a reception from the Halewood Leadership team, before being tasked with planting the final two trees in the orchard, ahead of the grand unveil of the commemorative plaque, in front of a crowd of volunteers.

The plaque was also designed and built in-house by our employees from the Press Shop and Paint Shop.

The Lord-Lieutenant of Merseyside– Mark Blundell, said: “Instead of planting one tree, Halewood chose to do 70 and have created an entire orchard. This is a wonderful gesture to the QGC campaign, that will benefit the environment and also the wellbeing of everyone here at Halewood.

“We are so grateful to all the employees for their support and for creating this lasting legacy to Her Majesty’s spectacular seventy-year reign.”

Halewood Operations Director, Trevor Leeks, said: “Being a Royal Warrant Holder, Jaguar Land Rover has a long-standing connection with the monarch, and we are very proud of our British heritage.

“We also wanted to do something unique that not only marked the Queen’s Platinum Jubilee year but also had sustainability, community and our people at the heart.

Trevor added: “The project has given our employees a real sense of pride in coming to work, as well as helping to build a community and camaraderie amongst those taking part. Together we have created a unique space that can be enjoyed by future generations at Halewood, for many years to come.”