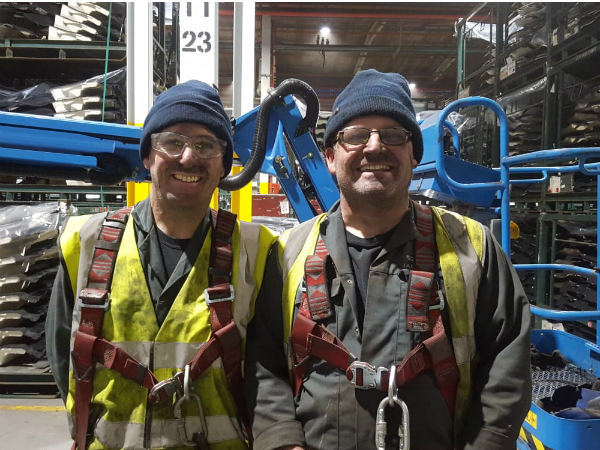 A TWINTASTIC TALE OF TWO RETIREES

As a new chapter began at JLR Halewood at the end of 2018 with the launch of the new Evoque, it was also the end of an era for terrific twins, David and Paul Drewett, who upon retiring in November had clocked up more than 84 years of service between them.

The dynamic duo both started as fresh faced apprentices in 1976, aged 16. Despite sharing their first four years together working as maintenance fitters in the former Paint Trim and Assembly (PTA) Department, they ended up spending the bulk of their working careers apart.

Whilst Paul continued in PTA on shifts, David moved into Estates Services in 1980, where he stayed for the next 38 years. Despite their close bond, working in different departments and alternate shift patterns meant they became like passing ships in the night. However fate would eventually bring them back together and eight years ago Paul was reunited with David in Estate Services, where they remained until their recent retirement.

Talking about his JLR journey, David said: “Paul and I get on so well, so it was brilliant to work our final stint together. We spent so much of our working lives apart and only really saw each other at break times so it definitely brought us closer together and made our last few years at Halewood even more special.”

Asked if they had ever considered a career outside the plant, Paul added: “Neither of us ever had a reason to leave Halewood and are proud to have worked for JLR. It’s a great company and has given us security throughout our careers so we couldn’t ask for more.

“It’s early days getting used to retired life but so far, so good! We do miss everyone at Halewood and are keeping in touch with the team and will be joining them on nights out as everyone is like family there.”

Offering their advice to new starters joining the business, they both said: “Grab every opportunity with both hands. There is so much support to help you to develop in your careers and become top of your game- you couldn’t work for a better company.”

From all of us at JLR Halewood, we wish David and Paul a very happy retirement!