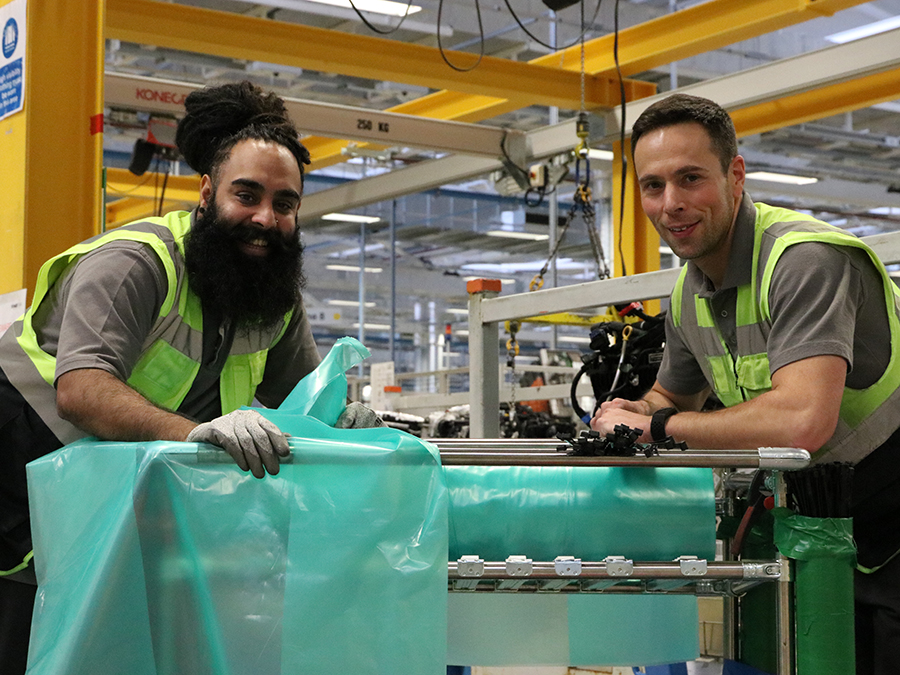 When Simran Mastani and Stuart Blackham came up with a solution to make bagging long blocks (semi-assembled engines for export to India and Brazil) easier and more ergonomic they didn’t even consider putting it forward as a Kaizen. Some gentle persuasion from the IPS team and the idea has been recognised as the winner of January’s Kaizen of the Month.

Stuart has worked at the EMC for nearly four years, having joined Jaguar Land Rover from Syncreon. The 37 year old lives in Dudley and is passionate about the business.

He said: “I really enjoy my job, but there are certain aspects of it that are quite challenging. We’d both been involved in Kaizen activity before, as we realise the importance of making processes better, easier, quicker and safer.

“The Kaizen came about from one of those challenges, a change to how bags for long block were delivered. They went from being in a box to being on a roll, which were harder to carry and also heavier. The bags reduce the risk of contamination getting into the long blocks as they are transported to other sites.

“Our then team leader suggested we look at a solution that would help us to make bagging long blocks easier and we came up with a trolley idea.”

Together Stuart and Simran visited red tag areas at the EMC with the idea of creating a trolley using discarded racking and other items not being used elsewhere.

Simran said: “We were really keen to upcycle items that we found in red tag areas and even went across to the petrol assembly hall to find a number of different items to make it possible to build the trolley. We’re still in the process of tweaking the final design, as having built it and clearly with our perfectionist’s hats on, it’s important that we continue to improve on what we’ve initially created.

“It’s quite funny really, it’s now so much easier and more ergonomical. It’s almost become quite enjoyable to do. We now have many more long blocks coming through Zone 16, so it was vital that we created a new system. It’s now easier as we move the trolley to where the long blocks are on the HUs, rather than having to grab bags and take them across to each long block.

“The idea is really scalable. Colleagues in Machining took the idea as an improvement for their area of work, so it’s great to see that it can be implemented elsewhere across the facility.

“The next step is to install a pole in the middle of the trolley to help us get the bags off quicker. This will also improve the safety of the design, as they’ll be no risk of the roll dropping off the trolley.

“I come from a logistics background, having worked as a floor manager at Aspray Logistics before moving to the EMC. I’ve always worked in logistics, although I do have a degree in Information Technology and Applied Mathematics.

“I’m born and bred in Wolverhampton, so the opportunity to come and work here was one I couldn’t let pass. Personally my life has changed so much since I joined the business. I’m now married, I’ve bought a house and my wife and I have had a baby boy. This job has given me the drive to move forward and achieve more.

“Steve and I are both passionate about the business, I’d love my lad to come and work here in the future, potentially as an apprentice.”

The idea is really scalable. Colleagues in Machining took the idea as an improvement for their area of work, so it’s great to see that it can be implemented elsewhere across the facility.