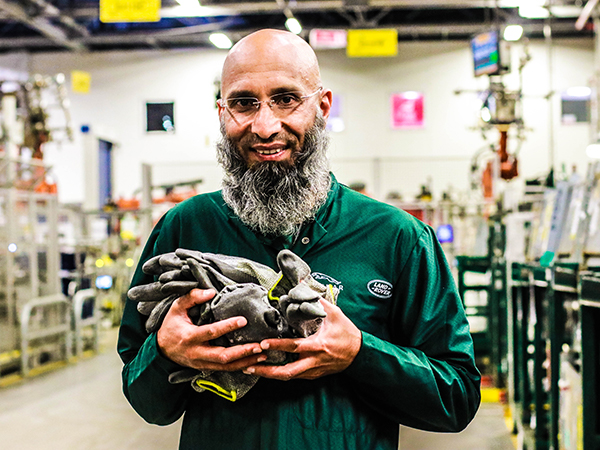 It was recently announced that all of Jaguar Land Rover’s UK sites send zero waste to landfill, something which has taken a lot of time and dedication to reach. Here at Solihull, one colleague has really thought with a responsible business mindset to play his part.

A standard grip glove used on the lines at Solihull lasts about a week. Over 3,000 colleagues on site need to wear grip gloves as part of their processes and PPE requirements. They also help out with quality.

Paint shop colleague, Imran Zahroof, has worked at Solihull for over 28 years and during his time he has got through his fair share of grip gloves. Previously, Imran would discard unwanted gloves, but recently had a responsible business mindset change and identified a new way to reuse the gloves and they are now benefiting hundreds of people in Madagascar.

Madagascar, an island off the coast of East Africa, has a population of close to 25 million people. Almost half the population live in severe poverty and at least a quarter of all deaths of children under five in urban areas are caused by water-related diseases.

Imran and his friend, Jabeer regularly set out on humanitarian and fundraising campaigns under the name “Meet your Muslim Neighbours” and visited Madagascar seeing first-hand how many people struggle to get local access to a clean water source. Many of the young men were digging wells of up to 15 meters with their bare hands to find water. It was at this point Imran had a light-bulb moment and he immediately thought of how the discarded gloves at Solihull could be reused to help out.

Imran explained, “it seemed like such a simple task, take an everyday item that we don’t need anymore and give it new life to help others. For people to be digging with their bare hands astonished me! It was a small place to start but we know it’s already making a difference to these people”.

In a joint effort with our partners DHL and Johnsons, Imran salvaged 600 pairs of gloves which were still fit for purpose elsewhere. Johnson’s who provide our workwear were able to clean the gloves, whilst DHL stepped in to deliver the 30kgs of gloves to the people of Madagascar.

On their next trip, Imran was able to raise some money to purchase an Auger drill, a manual drill that removes the drilled out material. They spent time understanding the landscape and culture, teaching local people the skills to identify the best areas to drill for water, and then build their own wells using this new equipment and recycled gloves.

One village has just received its second well, for 350 children at their school in Imamba. The first well was for Mousa, a blind man who has never had easy access to water; previously, villagers had to walk up to 5km for water which would be for cooking, cleaning and sanitary use. Mousa now has a well opposite his house, and a whole village of 400-500 people will benefit.

Each new pump and well costs around £200 and this includes a scheme they have set up to help the local economy by paying the Madagascan team a small wage.

Imran said, “The ten days we spent in Madagascar was full of ups and downs. I experienced poverty like you’ve never seen before but it was a beautiful experience. It’s quite overwhelming because you go with a soft heart but you also need to be tough as we can’t solve everything for everyone, all at once. When we were drilling for the first well, that moment we hit the water and you could hear it flowing and feel the pressure. Everyone cheered and felt that rush of adrenalin that we’d done it, I’ll never forget that feeling”.

Has Imran’s story inspired you? How could you play your part by becoming more responsible? If you have a similar idea about how you could up-cycle or re-purpose something to help out someone in need. We want to hear from you. Please email us at  Solihull@jlr-colleaguecommunications.com