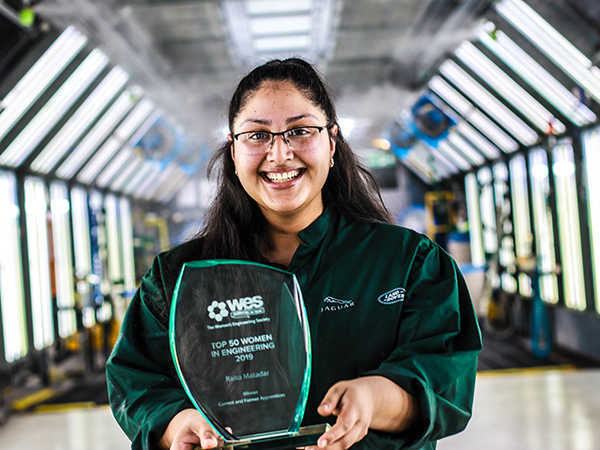 AN INSPIRATION TO US ALL

You wouldn’t have known it as Raisa Matadar walks around the Paint Shop with an air of confidence and a smile on her face but she is only in the second year of her Technical Support apprenticeship. At 22 years of age, that smile is now bigger than ever after being named in the UK’s Top 50 Women in Engineering - a prestigious accolade.

Wanting to work in engineering has always been an aspiration of Raisa’s. She explained: “There was something special about engineering which always caught my eye growing up. I really enjoyed science, in particular robotics. My brother is an aerospace engineer who I always looked up to when I was at school. No other female in my family has ever become an engineer before so I wanted to break the mould and thought why not.”

Raisa knew an apprenticeship was for her and working at Jaguar Land Rover was what she wanted to do. It’s safe to say she hasn’t looked back since. Raisa said: “I’ve loved every minute of my apprenticeship so far. I’m based in Paint and I absolutely love all the people and the support you get.”

It didn’t take Raisa long to show her passion for engineering and start excelling in her placements. John Sutherland, Maintenance Manager in Paint, commented: “To date Raisa has achieved distinctions in every module of her apprenticeship, it doesn’t really get much better than that. She approaches her work with a great attitude and has fitted into the Paint Shop team seamlessly.”

The Top 50 Women in Engineering aren’t just selected for excelling in the workplace though. Raisa’s second passion is supporting other young engineers to follow in her footsteps. Since starting at Solihull she has spent her own time volunteering at our Education Business Partnership Centre.

Raisa explained: “I was never encouraged to be an engineer so I don’t want that to be the case for other females potentially thinking about it. Even if I’ve inspired one female to become an engineer I’ve succeeded.” We asked Raisa if she had one piece of advice for any young budding female engineers. She explained: “If you have a passion, go and follow it. Be open to new pathways and don’t always follow the crowd. Just because it’s been done before, doesn’t mean you have to do it.”

Raisa, a big congratulations on your award!  If you want more information about apprenticeships at Jaguar Land Rover, visit www.jaguarlandrovercareers.com.