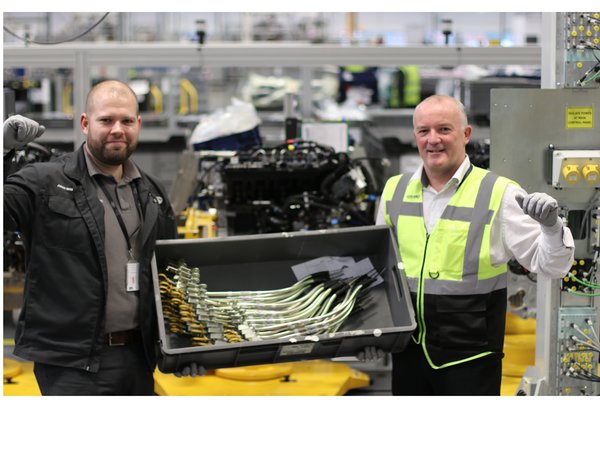 Last year, Keith Rowley and a team of four others formed a team improvement circle (TIC) and looked at different options to reduce waste at our engine manufacturing centre.

They got their walking shoes on and spent some time on the production lines, eyes wide open, to look beyond the ‘norms’ and see where efficiencies could be made.

They noticed that there was a huge number of plastic bags being used (and wasted) on the line where parts were coming in to the plant from our suppliers.

So, why were we using so many plastic bags?

Keith’s TIC team found that there were a few reasons as to why:

- Concern of contamination to parts

- Bags were accepted as part of packaging standard

- The packaging standard had never been challenged

The team- who named themselves the ‘Bag-Street Boys’- were determined to challenge the status quo.

They evaluated how many bags were beings used by each supplier and decided to focus their efforts on local suppliers with the highest bag usages.

They decided to press on with a Birmingham-based supplier, who provided a number of parts to us but used a huge amount of plastic bags when delivering our dipsticks and waterpipes for our engines.

In total, they were using 1,062 plastic bags per week just to get our parts to us.

What this TIC team found was that, not only were these bags being thrown away, but it was taking our associates time to unwrap them from the plastic.

The bag-street boys went to meet the supplier, who much to their surprise, were also frustrated with the amount of plastic being wasted and the amount of bags being used.

Keith Rowley said: “Their biggest surprise was that no one had ever challenged the use of these plastic bags before.

"For our suppliers, using them is just business as usual as they cannot deviate from the packaging standard set by Jaguar Land Rover.

“The supplier really welcomed the challenge and said that they were relieved that this project was going ahead.”

To ensure quality standards were kept high, the team ran a trial where they didn’t use the bags.

And following its success, they had the packaging standard form modified for these parts with the backing of senior management.

Even better… it wasn’t just the dipsticks and waterpipes that now didn’t use plastic packaging, they rolled this out across 51 parts supplied by Landers, ensuring that quality would not be compromised along the way.

This has meant a whopping £389.76 per week on the horizon is to be saved. And … 47,181 unrecyclable plastic bags per year will no longer being used at our engine manufacturing centre.

This is the equivalent to 17 football pitches worth of plastic!

So, what’s next for the Bag-Street Boys? Well, they’re going on tour, hoping to have the same success with other suppliers.

Keith said: “We’ve now started looking at all of our UK suppliers and we have found that there are so many opportunities for us to save and no longer use these plastic bags.

“We’ve recently met with another supplier who are also keen to work more efficiently, we have initiated the next round of trials.”

When asked how far he thinks his team could take this project, Keith said: “Obviously, we all have the day job to do, but we have the ambition to go and visit or at least investigate this option with every UK and possibly European supplier with high packaging waste.

“The amount of plastic waste around is really high-profile and noticeable, there’s no time like the present to do this.”

Well done to Raj Gosal, Joshua Warren (TIC leader), Jaz Singh and Jonathan Brady who were all part of this TIC circle.

We’ve now started looking at all of our UK suppliers and we have found that there are so many opportunities for us to save and no longer use these plastic bags.

27
The New Defender is here: Designed and built for the new age