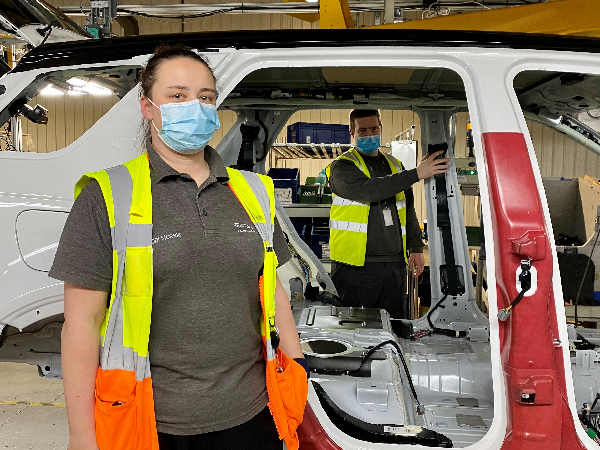 A team in Halewood's Trim & Final has come up with a “belter” idea to help raise awareness of how to effectively prevent trapping the seatbelt into the black brackets at the B posts (inside of the car door frame) after being called out to attend to a major call in the Hydro Area for a frayed seatbelt, last month.

After conducting a line sweep, the team which was made up of Business Improvement Production Leader, Jodi Morris and Associates Kevin Melia, Stephen Gallagher and Phil Jarvis, soon discovered another vehicle with a same issue, so a full damage investigation was carried out to uncover the source of the problem.

After recreating the damage at T1, the team were quickly able to isolate the defect to this area which had occurred during the installation of the black bracket to the B Post.

Due to the way it had been gunned to the inside of the door, the seatbelt had become trapped behind the bracket, so when it was pulled away from the bracket during the testing process, this caused the belt to fray at the sides.

To prevent the same defect from occurring again, the team decided to don their director hats and produced a short video to share with Associates at their Five Minute briefs.

The film helped employees to visualise what had caused the damage to the belts and served as a reminder of the correct way to install the brackets to ensure they are secured correctly, so the seatbelts don’t become trapped behind them.

Jodi said: “The solution to the issue was luckily quite simple- the problem, however, was explaining it and getting the message out to employees as quickly as possible, to prevent it happening again.

“We decided the best way to explain this was to do it through a short video reminding Associates and new starters of the processes involved in securing the bracket properly, which was shared at their Five Minute Briefs.

Sometimes it’s the simplest ideas that are the most effective and can make the biggest difference. “The video was a great way of showing the problem in action as it’s so visual and we haven’t had a single case of a seatbelt fraying since.

She added: “Kev, who was our resident camera man and filmed the bracket video, has also had more filming requests to help support other teams with improving quality processes on the line, so we have been keeping him busy!”

We can all contribute to improving quality and making sure we do the best possible job that we can, so if something in your process isn’t working, please raise it with your manager so we can put the right actions in place, just like Jodi and the team did. Great work everyone!