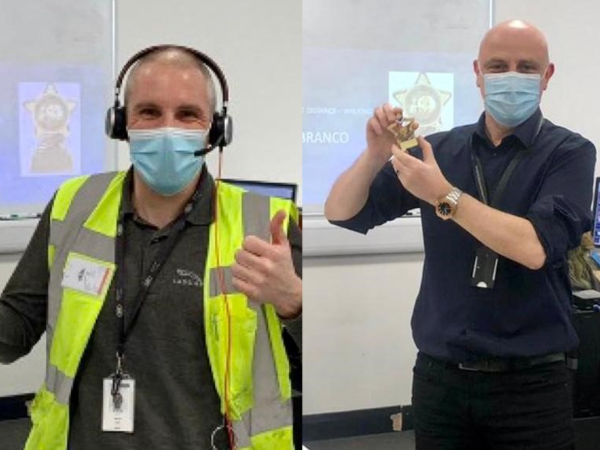 BIW ME TEAM COVERS THE EQUIVALENT DISTANCE OF TRAVELLING BETWEEN HALEWOOD AND CJLR IN 20 WEEKS!

A Mechanical Engineering team in Body in White have completed an epic fundraising challenge either running, walking or cycling 4900 miles between them, which is the equivalent distance of travelling between Halewood and our JLR sister plant in China.

It took the team 20 weeks to complete and in the process they have raised £1,729 for Alder Hey Children’s Hospital.

After crossing their virtual finish line last week, they celebrated their incredible achievement with a socially distanced awards ceremony with prizes being given out to the individuals who had clocked up the most miles, as well as a wooden spoon for the fewest miles completed!

Beth Christian, a Process Engineer in BIW Manufacturing Engineering, who co-ordinated the challenge, said: “We chose Alder Hey because it’s a charity that’s close to all our hearts that has supported members of our team and their families through some incredibly difficult times.

“This seemed like a positive team activity both to raise funds for Alder Hey as well as doing something important together, as much as social distancing allowed and we decided to make it in to competition which really helped to spur everyone on as we can be a competitive bunch!”

Asked why they chose CJLR, Beth said: “China is the furthest site from Halewood which is why we chose to cover that distance, however, since we completed the challenge, we’ve now decided to add another 4900 miles to the clock and complete another virtual tour to New Zealand, which starts today (22 February).

“Between everyone, it took us 20 weeks to get from Liverpool to China but hopefully with the lighter nights and warmer weather on its way, we will reach New Zealand much faster.

“Regardless of how long it takes- or what we raise this time, I’m really proud of how much the competition has inspired everyone to go out for a walk, run, or bike ride.