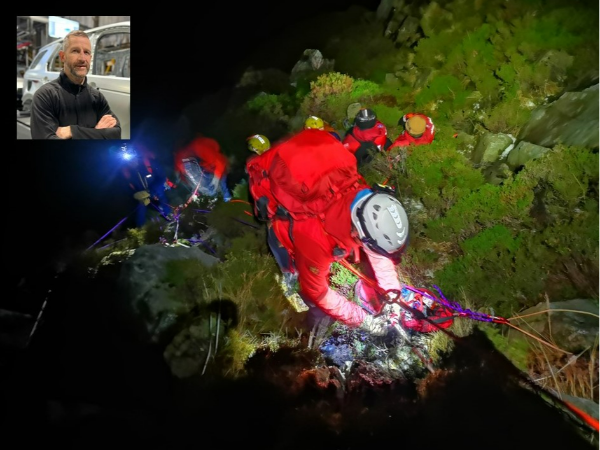 While many of us were tucking into leftover turkey sandwiches and selection box chocolates on Boxing Day, BiW Process Engineer, Martin Wall, was busy assisting in a four-person mountain-rescue mission off the cliffs of Snowdonia, North Wales.

Martin, who is a volunteer for Ogwen Valley Mountain Rescue Organisation, received the SOS call at 5.45pm on Monday 26 December, after a group of walkers became stranded on Tryfan, one of the 3000 ft Welsh mountains on the Glyderau range.

The quartet had set off late on their Boxing Day walk - equipped with only two head torches and Google Maps to navigate by.

As darkness fell, they struggled to see where they were going, so decided to descend by a different route, sliding down the climbers’ descent of Nor Nor Gully, where they got stuck halfway down and had to call for help.

Thankfully, all four were brought down safely by Martin and his four teammates from Ogwen Valley Mountain Rescue, who were praised on social media for their skills and expertise in completing the tricky rescue in the darkness.

Martin, who is an experienced rope rescue technician and mountaineer, helped to lower the four walkers down the cliff edge and get them back onto safe ground.

Speaking about the rescue, Martin said: “When I answered the rescue call, I was just about to put a mince pie in the oven and decide what to put on the TV next – so it came as a bit of a surprise.

“When the team and I met at the Rescue Base, we jumped straight into the Discovery Sport - which was donated to Ogwen Valley Recue Organisation through JLR’s employee Motorvate scheme – and drove to the nearby campsite where we could then set off on foot on our ascent up the mountain, carrying the rescue equipment between us.

“The rescue itself took around eight hours from start to finish because it was hard to locate the group in the darkness and it was also very windy. It was such a relief when we found them and were able to give them a hot drink and wrap them up in a warm coat before lowering them to safety.”

But did Martin get to eat his mince pie? He said: “We got back to the Rescue Base at 2.30am and were greeted by a nice cup of tea and a mince pie, so I didn’t miss out one after all.”

Martin added: “2022 was the busiest ever year for the Ogwen Valley Recue so we are so grateful to be able to benefit from the Discovery Sport and stretcher wheel which have both been donated by Jaguar Land Rover Halewood through the employee Motorvate scheme which remards good attendance.”

Trevor Leeks, Halewood Operations Director, said: “Martin is a true testament to our company purpose ‘living the exceptional with soul,’ volunteering in his own time to help others and save lives – thank goes to Martin for being such a fantastic ambassador for Halewood.”

Trevor added: “I am additionally delighted that the car we donated to Owgwen Valley – which was also made by our people - is able to play such an important part in amazing rescue missions such as this one.”

1
TIC TOK: THE COUNTDOWN IS ON!