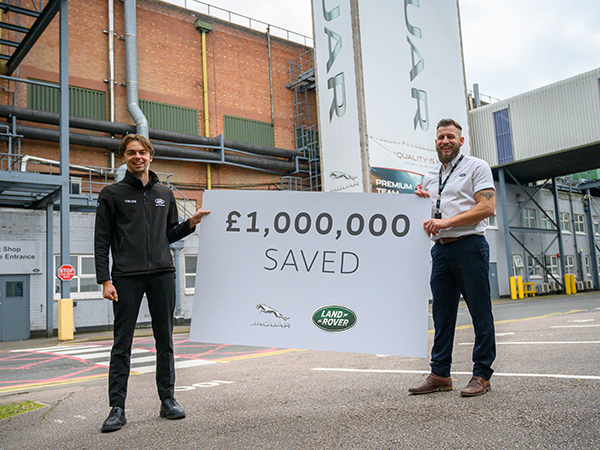 Castle Bromwich’s Manufacturing Product Integration (MPI) team have hit a stunning milestone after months of doggedly chasing down cost as a part of their day-to-day actions, saving the business more than £1million.

To make their contribution to the Charge + and RESET initiatives, the MPI team pooled together savings they generated across dozens of projects after working with manufacturing colleagues at CB.

The MPI team are responsible for helping introduce new products into the manufacturing process on site and, as part of their role, implemented a range of ideas to cut out unnecessary spend from their launch activities.

Whether it’s saving costs on transport, being clever about how they make the most of their VB build cars for multiple testing or swapping out and reusing materials the team have left no stone unturned in their search for efficiencies, coming up with more than 50 cost-saving ideas over the past year.

The savings have ranged from hundreds of thousands to small sums but they have all added up to a mammoth saving.

Larger scale projects have included simple ideas such as reducing the number of sets of training parts for product coaches who are familiarising themselves with new model year vehicles or using 20MY parts that are common to 21MY when piecing together early vehicles that are used to prove out the manufacturing process.

Both of these projects each saved well over £100,000 each but Dan Beddow, Lead Launch Engineer in MPI, said the smaller savings were just as significant because it was about the behaviours the team showed and their ability to work across functions that would eventually translate into even bigger savings in the future.

“This whole project was not just about cost saving, it was about challenging activities we’ve considered to be commonplace and asking if there’s a more efficient way of doing things for the business," he said.

“A great example was our team working with Plant Launch and the trackside teams on camouflaged seat covers.

“Camouflaged vehicles are also camo’d internally and part of that is a £20 passenger seat cover. The trackside team challenged the need for this given the cover from our seat supplier Lear, that costs £1, does the same job so not only did we reduce the cost by £19 per car but after speaking to Lear they also said we could have as many as we wanted.

“The saving is not astronomical but its been the behaviours on display that have been important. It’s been a real grasping of the RESET mindset.”

Ged Lenehan, Manufacturing Programme Director within MPI based at Castle Bromwich, said: “Both myself and the function’s senior leaders are hugely proud of what the team have managed to deliver over the past few months.

“It’s not just been about identifying cost savings, it’s been a whole mindset that the team have lived day-in and day-out and I’m really proud of how committed they’ve been to helping the business become more profitable.

“For me it’s a cast iron example of how marginal gains can add up over time so to reach the £1 million milestone is a fantastic achievement and one that deserves congratulations.”

“It’s not just been about identifying cost savings, it’s been a whole mindset that the team have lived day-in and day-out and I’m really proud of how committed they’ve been to helping the business become more profitable."