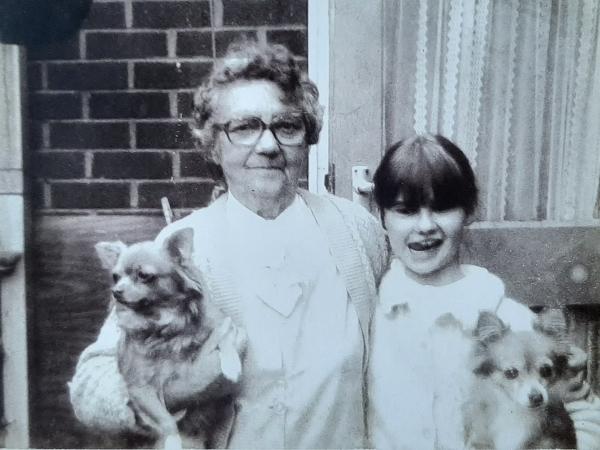 As you’ll all be aware Castle Bromwich has a long and proud manufacturing history having begun life as a shadow factory producing Spitfire fighters and later Lancaster bombers during the second World War.

Recently Rob Adams, a Group Leader inside the Press Shop approached us with a family tale involving false accusations of espionage at the factory involving his wife’s grandmother who was suspected of spying for the Axis powers.

Annie Gertrude Hodgkinson was described by her granddaughter Tracey as a “bible abiding, religious woman” who worked as a cleaner here at Castle Bromwich during the war.

Annie had six children of her own and on top of that had taken in two other homeless children into her home.

“It was hard times back then, with rationing and the majority of supplies and materials being used for the war effort,” continued Tracey.

“In the spirit of made do and mend, Nan had taken some old material labelled as scrap from the factory and used it to make handkerchiefs and other small items of clothing for her own and other local children.”

She certainly wasn’t expecting to be called into the office by military police officers and accused of passing on top secret documents of aircraft technical drawings to the enemy.

It turned out that the material Annie had been turning into hankies was actually the drafting linen that contained the technical specifications for the famous British fighter built here at the factory.

“After a long interview and having been shown the handkerchiefs the Military Police were convinced of her innocence and dropped the charges,” said Tracey. “The factory bosses even allowed her to keep taking some of the scraps as long as they contained none of the top-secret information.”

What an amazing story and just goes to show that they were all over their data protection training even back then!

If you are related to anyone who worked here during the past and want to share their story, contact CBcomms1@jaguarlandrover.com

1
Castle Brom Do A Quality Job Bringing In The Harvest