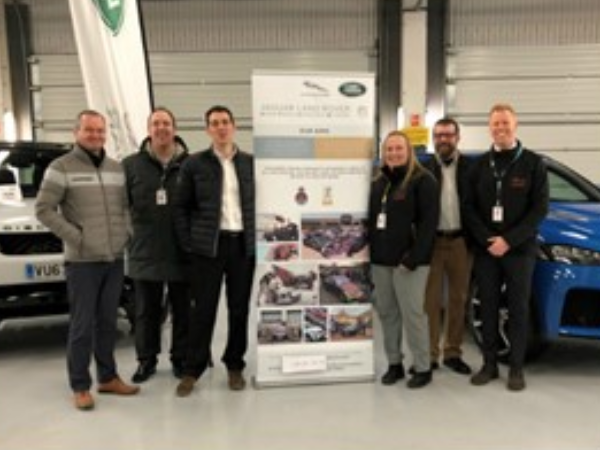 On Saturday 27 June it will be Armed Forces Day, which is a chance to show support for the men and women who make up the Armed Forces community: from currently serving troops to Service families, veterans and cadets.

Earlier this year, our JLR Armed Forces Community Network lead, Mike Burton, got the chance to represent Halewood at a national service leavers and careers event / track day at Silverstone.

A team of around 15 JLR network members provided careers advice, mentoring and experiences for over 300 service leavers. The event was a great success showing off our experiences and vehicles.

Mike had a great day telling us, “Though we’re not recruiting at the moment the ongoing work we do as an Armed Forces Covenant Gold Alumni holders is fantastic and I urge everyone to support this great cause, it really makes the difference to people.”

Then during lockdown Halewood colleague and member of Jaguar Land Rover’s Armed Forces Community Network, Andy Thompson took to the virtual racetrack, helping manage a team of UK Veterans in the Inter-Service eSports F1 2020 Championship, competing against experienced race teams from the Royal Navy, Army and Royal Air Force.  This was the first year that a Veteran team has competed in the championship and already they are making an impact after only three races of the season.

Andy joined Jaguar Land Rover as a lead scheduler in the Press Shop in Halewood in 2016, following a successful career in the Royal Electrical Mechanical Engineers.  Having joined the British Army at the age of 18, Andy served for 22 years, reaching the rank of Warrant Officer Class 2 and serving on operations in Bosnia, Northern Ireland and Iraq.  In 2010 his life changed for ever when he lost both legs.  During his rehabilitation prior to medical discharge, Andy was introduced to Mission Motorsport where he was given the opportunity to take an active part in track days and work in the charity’s headquarters in Oxfordshire.  This led to successful work placements in Bentley and Jaguar Land Rover in 2015 before taking up his current role in Halewood.

0
Kaizen, it's not for dummies