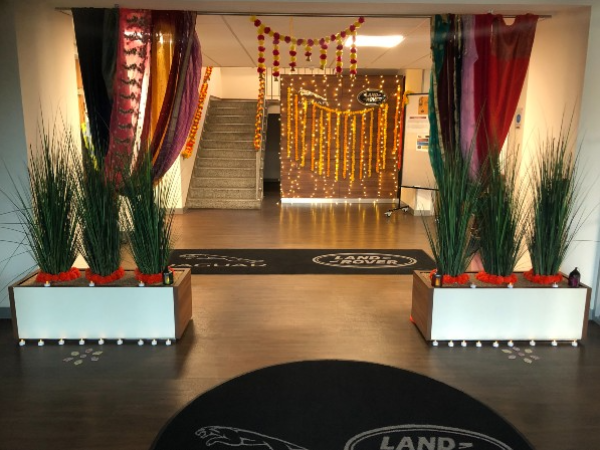 This year, official Diwali celebrations begin on Thursday 4 November. To celebrate the R.E.A.C.H network and Halewood Inclusion Council have pulled out all the stops to decorate our foyer area which now has colourful hanging drapes, Rangoli patterns made up of powders and fresh flowers, hanging garlands, fairly lights and lanterns!

It looks amazing, if you’d like to see it or take pictures the decorations will be up until Friday 5 November.

Rab Singh, tells us: “We decided to dress the main entrance to the Admin Building as decorations are traditionally put in the entrance to homes, and as the Admin Entrance is the main entrance to our Halewood home, we thought they would look great here.  Please take some time to come and have a look and take some pictures, as it’s bright and colourful, really helping us to celebrate Diwali here in Halewood.”

Diwali is the five-day festival of lights, a festival of new beginnings and the triumph of good over evil, light over darkness. It is celebrated by millions of Hindus and Jains across the world, whilst Sikh’s mark Bandi Chhor Divas – to remember the release of the 6th Guru. While these are separate festivals and the events fall on different days in the lunar calendar, both events will be celebrated on 4 November 2021 in the UK.

Jaguar Land Rover’s R.E.A.C.H network exists to create a more inclusive culture at Jaguar Land Rover by empowering under-represented employees from all ethnic and cultural backgrounds, ensuring they are represented and included in the workplace and have equal opportunities.

You can also join R.E.A.C.H on Yammer to learn more about these celebrations, as we delve deeper into the communities and their historic contexts. To be added to the monthly newsletter and learn more about many cultures celebrated by our colleagues around the world, contact reach1@jaguarlandrover.com

Most scholars believe Hinduism started between 2300 B.C. and 1500 B.C., whilst many Hindus argue that their faith is timeless and has always existed. Hinduism has no one founder but is instead a fusion of various beliefs.

There is not just one reason to celebrate Diwali as the the festival is linked to multiple religious texts. In northern India, Hindus celebrate the return of King Rama and his wife Sita to his kingdom, Ayodhya, after their 14-year exile. They also celebrate the day Mother Goddess Durga destroyed a demon called Mahisha. In southern India, Diwali is linked to a story about the Hindu god Krishna, whilst in western India, Diwali is associated with asking the goddess Lakshmi for prosperity in the coming year.

Jainism is an ancient Indian religion that teaches that the way to liberation and bliss, is to live a life of harmlessness and renunciation. It was established by Lord Mahavira around 500 B.C.

During Diwali, Jains celebrate the moment Lord Mahavira reached a state called Moksha (nirvana, or eternal bliss). Diwali is a celebration of Lord Mahavira’s teachings and his contributions to Jainism and humanity. Lamps are lit to symbolise keeping the light of Lord Mahavira’s knowledge alive, and the day after Diwali marks the Jain New Year.

Sikhism was established by ten Gurus over the period from 1469 to 1708. The Gurus in Sikhism are regarded as enlighteners and divine messengers of the Timeless. They were universal men who freed our minds from bigotry and superstitions, dogmas and rituals, and emphasised the simplicity of Sikhism.

Sikhs do not solely celebrate Diwali for the same reason as other faiths. Instead, they celebrate Bandi Chhor Divas at a similar time to Diwali. It celebrates the occasion of the return of the sixth Guru, Guru Hargobind Sahib Ji, who was freed from imprisonment in 1619. As a result, Bandi Chhor Divas is a celebration of self-sacrifice and helping others for many. Guru Ji arrived home to his followers around the time of Diwali, which has long been a national holiday in India. However, Sikhs did begin celebrating the festival before this date. The foundation stone of the Golden Temple at Amritsar, the most holy place in the Sikh world, was laid on Diwali in 1577.

2
New Discovery Sport: Engineered and designed to be versatile for everybody’s needs