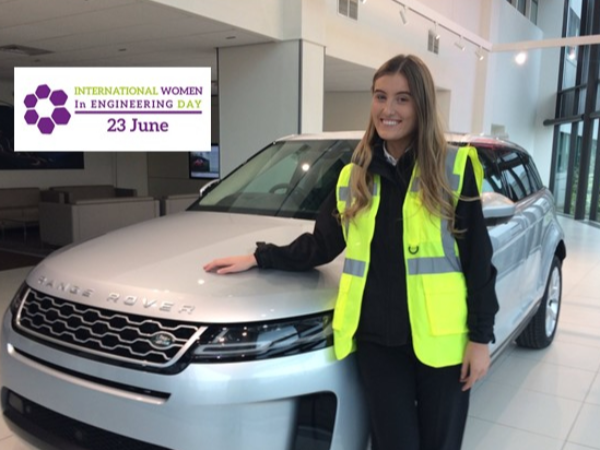 This Wednesday, 23 June, marks International Women in Engineering Day, an international awareness campaign which raises the profile of women in engineering.

So, Team Talk took the opportunity to speak to Danielle Flynn, a multi-award-winning Higher Apprentice in Halewood’s Body in White department, about why she swapped her space at university to peruse her passion for engineering at Jaguar Land Rover.

Over the last four years, through her amazing work at JLR, Danielle been crowned Knowsley Business Awards’ Apprentice of the Year, as well as being named amongst the Top 50 Women in Engineering, by the Women’s Engineering Society and as one of the Liverpool Echo’s 30 people under 30 changing the face of Liverpool!

Proving mechanics is not just for men, Danielle, who completes her Applied Engineering degree apprenticeship this summer, said: “Before I started my apprenticeship, I had a place at university, but I thought it would be an invaluable experience to learn on the job which is why I took the leap and enrolled with JLR. I’ve gained so much knowledge from my time here and have had the opportunity to study a broad spectrum of subjects.

Danielle, who is the only female apprentice in her year and the first female STEM ambassador for JLR's apprentice team, said: “I did feel nervous about joining a male dominated industry but being a woman has never held me back at Jaguar Land Rover and I’ve always felt valued and treated equally by my teammates.

“However, there is still a long way to go culturally for the engineering industry which is why I’ve always taken part in conveyor and activity days with schools and colleges to help inspire younger girls looking to get involved in STEM (science, technology, engineering and maths) subjects. For me, it’s important that one of their first images of an engineer they see is a woman like myself so we can diminish the stereotype of it being a male only discipline.”

Talking about Halewood, Danielle added: “It’s a great time to join our plant as there are lots more women coming through which is very positive. When it comes to Halewood, there are so many people who are willing to help you to learn and progress and I’ve watched the factory evolve and become more inclusive during my time here.

“There are so many opportunities in this business and different fields you can go into through Engineering so it’s a really exciting time to be part of the Halewood team.”

**Please not picture was taken before Covid-19**

I did feel nervous about joining a male dominated industry but being a woman has never held me back at Jaguar Land Rover and I’ve always felt valued and treated equally by my teammates."