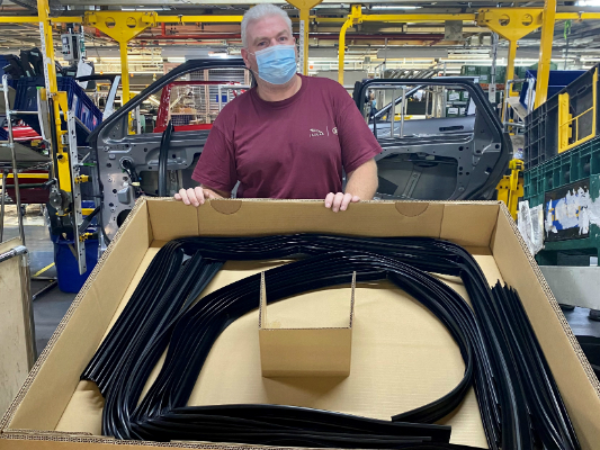 CHARGING INTO 2021 WITH “CRATE EXPECTATIONS!”

To kick-start this year’s On Track, we wanted to share one of the incredible cost-saving initiatives put forward by one of our employees, which not only has the potential to save Halewood hundreds of thousands of pounds a year but will also enhance the ‘quality’ of our manufacturing processes, which is key in our journey to become the plant of choice for Jaguar Land Rover.

This idea came from John Buckley, a group leader on Door Line 15, who took time to speak to On Track about why it pays for employees to think outside the (cardboard) box.

According to John, if we made a simple change to the way we transport the Evoque front glass door seals to the Associates on the Door Line, Halewood could save an estimated £1,000,000 per year.

Currently the seals are delivered in large cardboard boxes, but only contain 190 seals, so there is a lot of wasted space, which is a ‘missed opportunity’, according to John.

John said: “These boxes could fit three times the amount of seals they hold but the pushback has always been that we don’t want them to be damaged in transit.

“That’s why I came up with the idea of putting the seals into a large cardboard crate once they came in to plant, which can hold 135 seals and place thin cardboard dividers in between each batch to separate and protect them.

“So rather than deliver box after box down the line, send one large cardboard crate instead which contains three times the amount the smaller ones do. That means DHL only has to deliver the seals to the Door Line once a day, rather than three times a day- so it’s a no brainer.

“Based on 45 weeks, this has the potential to save £500,000 in packaging savings and that’s just one side of the car, so you can double that straight away- but remember that is just for Halewood.

“Imagine if we did this at every Jaguar Land Rover plant? The potential savings for the business are huge.”

“The large cardboard crates are now being used on our Door Line and we are seeing a real difference by not having so many deliveries.

“It’s a more streamlined, efficient process which will help to keep cash in our business and also help us to reduce our carbon footprint as we are now only using 225 boxes, rather than 675 which is an incredible achievement in itself.”

Fantastic work John! If you have any ideas on how to improve the quality of our processes, please communicate these, to your group leaders. There is always a better way and together we can make a difference to Halewood more competitive and efficient as a plant.