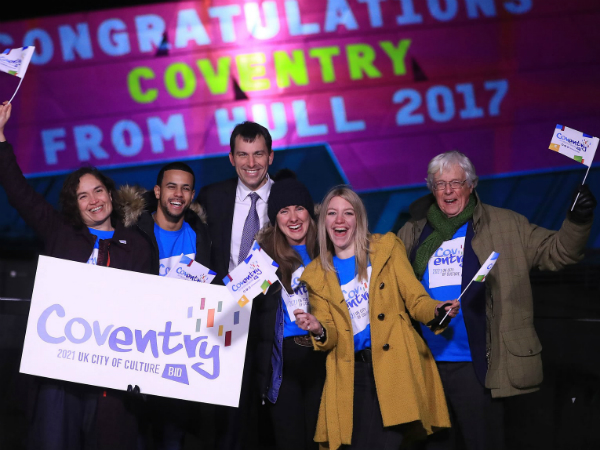 The decision was made after an independent panel of culture experts, chaired by television producer and screenwriter Phil Redmond, visited each of the five candidate cities before recommending Coventry as the winner.

The bid impressed the judges with its focus on youth, diversity and the scale of impact not only in Coventry but across the UK as a whole.

Coventry will take the title from Hull 2017, which has used City of Culture to transform its reputation as a destination for arts and culture both at home and abroad.

It is estimated that Hull’s local economy has received a £60 million boost in 2017 and the city has been praised for how it has engaged local residents in the cultural programme. Nine out of 10 residents have attended, or taken part, in a City of Culture event and since it was awarded the title in 2013 it has received more than £3 billion of investment.

I would like to congratulate Coventry on winning UK City of Culture 2021. The title is an incredible opportunity for Coventry to boost investment in the local economy, grow tourism and put arts and culture centre stage.

We received excellent bids from all the cities and I would like to thank them for their efforts.

In 2017 I have seen the truly transformative effect this prestigious title has had on Hull. The city has embraced City of Culture and in doing so has demonstrated how culture, the arts and heritage can bring communities together. I look forward to seeing what Coventry has in store in 2021.

Once again the process has highlighted the depth and strength of culture across the UK. That made it difficult choosing a winner, but I would like to congratulate Coventry and I am sure they will build on the legacy of Derry-Londonderry and Hull and bring about a transformational change in 2021.

For those that weren’t successful this time, I hope, as has happened in other places, that they will look to the future and build on the wider cultural partnerships they have created.

The third UK City of Culture announcement comes after the five shortlisted cities were assessed over a number of months by the independent advisory panel. Each city was visited by the panel and invited to present details of their plans for City of Culture.

There have been two previous UK Cities of Culture: Derry-Londonderry in 2013 and Hull in 2017. Both cities have realised economic benefits such as increased investment and a rise in visitor numbers.

Coventry now has three years to prepare its year-long programme of activity for 2021. As part of its status as UK City of Culture 2012, Coventry will be eligible for a £3 million grant from the Heritage Lottery Fund.

Watch the video below to see how JLR played a part in helping Coventry, the city of our Whitley HQ, win the title.