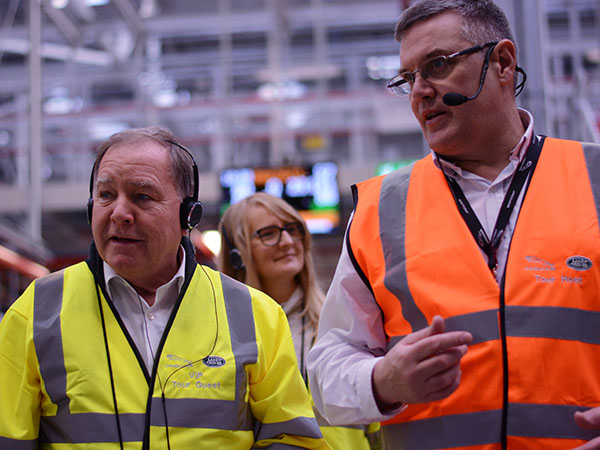 Alex Moss arrived at Castle Bromwich with a certain view of the Jaguar Brand, after a tour around the plant he left with quite another.

“I’ve always thought Jaguars are for old blokes with flat caps” he said with a smile on his face as he arrived at the Visitor Centre on a slightly overcast January morning.

Alex is the Group Managing Director for Duo Group, a privately owned business that operates globally in the quarrying, aggregate and material handling industries. His companies provide a range of processing services on major sites and projects all over the world.

The processing side of his business has just finished work on the Aberdeen bypass, a project that involved the removal of 5.5 million tonnes of granite from the Scottish mountains in just two years and that is just one of many projects.

Alex tells me that since starting, the company has extracted around 127 million tonnes of materials that when washed and cleaned ultimately end up as building and road making materials.

That’s not all they do either, his global operations also mine for rare materials and gemstones in places as far flung as Africa and Trinidad and Tobago. In addition they also have a manufacturing business based in Somerset that make bespoke rail recovery systems, so Alex has much more than a just a passing interest in logistics and manufacturing processes.

He also has much more than a passing interest in cars.

The part of the company that I haven’t mentioned as yet is the motorsport side of the business that stems from Alex’s passion for racing. Beginning in his own personal karting exploits, where he once represented Great Britain, Alex also took part in saloon racing before turning his enthusiasm for the sport into the main marketing tool for his company.

The Duo Motorsport team are what he modestly describes as a ‘reasonable player’ in the British Touring Car Championship (BTCC) where they sponsor three teams, Motorbase Performance, BMW Pirtek Racing and Handy Motorsport who race Ford Focuses, BMW 125i M Sports and Alfa Romeo Giuliettas respectively.

Alex also tells me that they also ‘do little a bit’ in Porsches and while doing more research I noticed that last year they also backed an attempt to break the British land speed record with the Staygold team driving a 28ft long turbojet engine powered car taken from an ex Saudi Air Force Strikemaster fighter plane.

Arguably though, the thing Alex is most passionate about is their work bringing fledgling talent up through the single seater championships. Duo Motorsport are key sponsors of the Formula 4 championship alongside Ford and Alex is proud to give young drivers the opportunity to race and develop their talents.

So it is clear that he loves his cars and knows more than a thing or two about manufacturing but why if he thinks Jaguar is an old man’s car did he sign up for a VIP tour of Castle Bromwich, the home of Jaguar Manufacturing?

Alex was born in Sandy Lane Coventry, just down the road from the Daimler factory.

When he moved just outside of Coventry he lived in view of the Jaguar Browns Lane plant for many years and went on to set up the offices for his company in the area too. The Jaguar brand has always quite literally been around him for many years.

“I used to go by every day,” recalled Alex. “Seeing all the cars and the transports go in and out and often wondered why nobody ever bought me one to try. You’ve got to bear in mind that if people aren’t already Jaguar people you have to take it to them and prove what it can do.”

Through his business fleet he has owned many a Range Rover over the years and describes them as “the best in the four wheel drive range.” His decision to visit Castle Brom to see Jaguars being built however had come from his lawyer and friend Samantha Wright who accompanied him on the tour.

As a partner at Coventry based Solicitor firm Bttj (Brindley Twist) Samantha’s work had seen her involved with various aspects of the motor industry. Her husband also works for JLR as an engineer at Whitley so she knows quite a bit about the Jaguar brand and our cars.

I got the feeling that Alex’s ‘pipes and slippers’ jokes were something that Samantha had heard before and she was keen for him to find out just what Jaguar was really about.

David the tour guide was equally keen to show off what happens here at Castle Brom and decided a great way to start was by heading straight into the sports car facility to watch an F-TYPE SVR coming off the production line. Alex’s interest peaked immediately, himself having driven the type of cars that would stack up against this version of the F-TYPE. You could tell he knew his cars too by the type of question that was sent David’s way about the performance and capabilities of the SVR.

These type of questions were not just limited to the models as we walked around plant though, Alex was also keen to understand our production methods and continued to ask some detailed questions about our processes and how we ensure quality in our products as we toured around Press, BIW, Paint and finally the XJ Trim hall in F Block.

“Having gone around the site today I can say that the cars is as good if not better than the other brands you look at in the same class.” Said Alex talking about the XJ. “The assembly of it and the finish is excellent and you can clearly see the pride that the people who build it have in the car. That passion makes all the difference, if the workforce have pride in it, it will come out looking good and it sure does.”

Asked if he’d consider a Jaguar for himself now, his response was ‘why not?’ Jaguar are now in a situation where you can see they are there and you’ve got to take them seriously. You’ve got a car there (referring to the F-TYPE SVR) that in terms of performance and ability to ‘make you feel’ is as good as a Ferrari or McLaren.”

And he could also see the potential for Jaguar models to make its way into his business fleet too. “There is a range of cars there that would work there for some of our people and the quality is there too.”

To sum up, I can safely say a look at our manufacturing plant  has clearly changed the way Alex looks at Jaguar.

“I came in thinking pipes and slippers and I’m going away wanting to put my race suit on.” 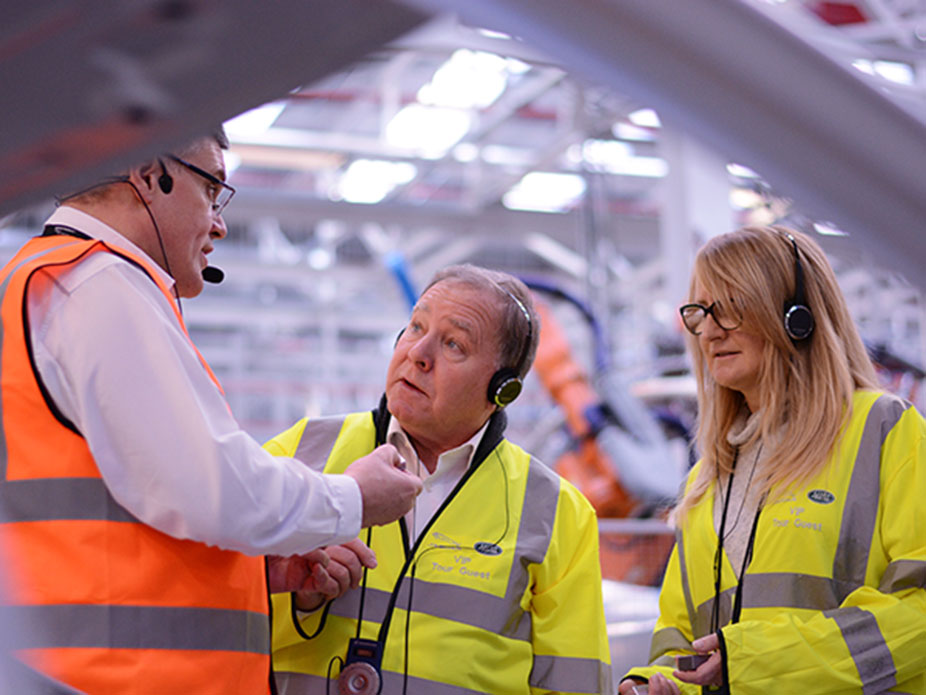 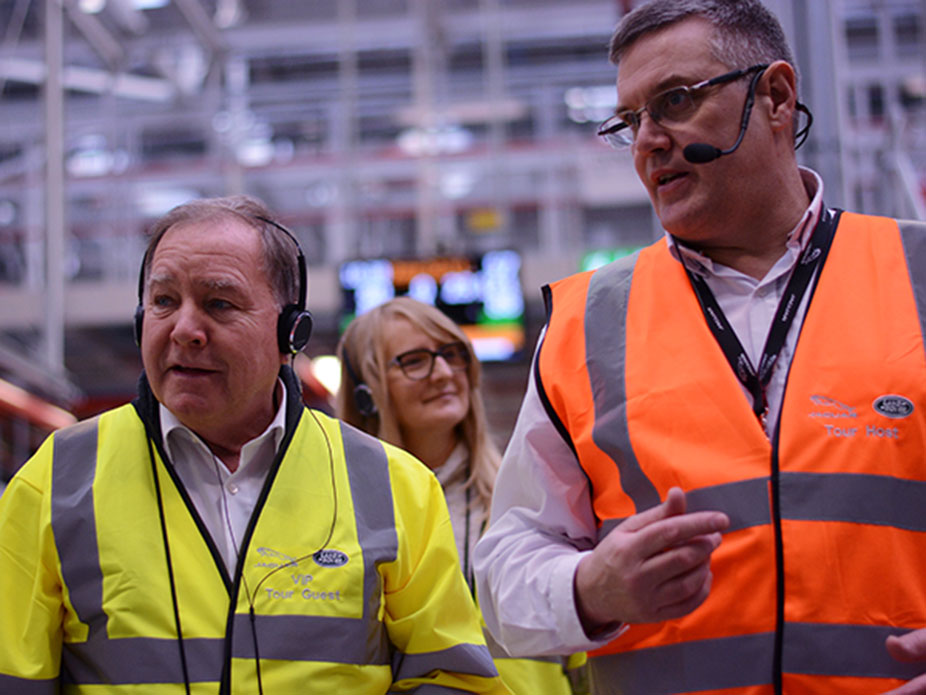