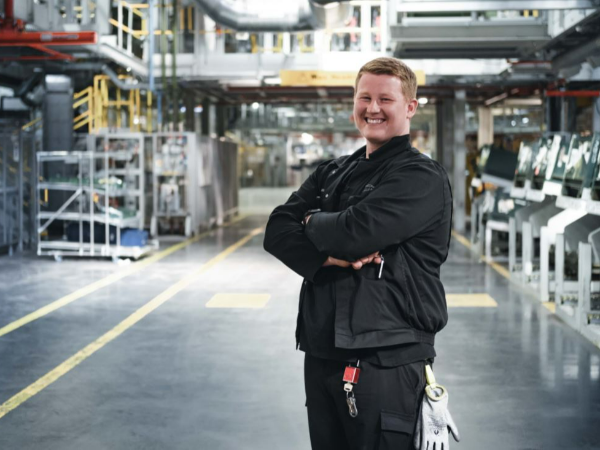 Last week, Dan Hampson, from Body in White, received the surprise of his life when he was surprised at work with the news that he had won a brand-new Jaguar E-PACE, through our employee MOTORVATE scheme.

Dan was only few hours into his early shift when Body in White manager, Clive Robert’s, did his best Andy Peter’s act and revealed to him, in front of a crowd of his teammates, that he had scooped the top prize!

Talking to Team Talk about his once in a lifetime win, Dan said: “I couldn’t believe it when Clive said my name - I was shaking! All this for coming to work every day and doing my job- it’s unbelievable.

“I have an old Ford Focus, which has seen better days, and soon I’ll be getting the keys to a Jaguar E-PACE, these things don’t usually happen to me!”

And Dan’s luck seems to be on a roll as he revealed that the car win wasn’t the only good news he received that day, Dan, added: “they say these things come in threes don’t they… well today I won a Jaguar E-PACE, just got a call to say an offer has been approved on our mortgage and we finally have a date for our dog’s surgery which we have been waiting weeks for! I’m made up!”

A huge congratulations to Dan on his MOTORVATE win and who knows, next time… it could be you!

MOTORVATE is an employee scheme that rewards good attendance -- any employee who has achieved 100% attendance, in a quarter of the year when the MOTORVATE awards are triggered, is automatically entered into a company- wide prize draw, for the chance to win one of two Jaguar E-PACES.

Great attendance helps us to deliver on our priority- building the best quality cars and getting them to our customers on time, so we can maintain our reputation as a dependable plant of choice.