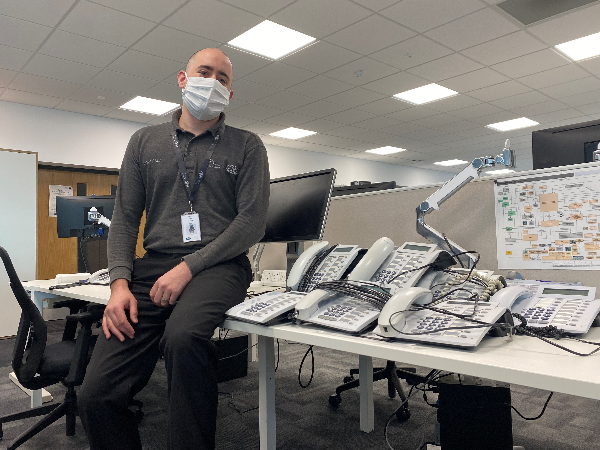 DAVE AND TONY RING IN £7,000 SAVINGS FOR HALEWOOD!

There are currently 700 desk phones in Halewood that are not only going unused, but some of them aren’t even plugged in!

So, what’s the issue? Surely if the phones aren’t making or receiving calls, or connected to a socket, they can’t be costing us anything, right?

Actually, that’s not true- in order for the line rental to be cancelled, each phone needs to be decommissioned by IT Services- a process which is often being overlooked when people move desks and is therefore resulting in much-needed cash going out of our business.

According to Dave Parry, Integrated Production Systems Manager at Halewood, who has been encouraging colleagues to get rid of legacy telephones and switch over to Teams, said: “Based on the number of inactive lines we have on site, this is costing Halewood in excess of £60,000 a year- which is madness.

“That’s why I am calling on everyone to help us by not only moving to Teams, but also ensuring that when they do, they go through the right IT channels to make sure their phones are fully decommissioned.

Someone who has already taken it upon himself to ring in some savings for Halewood is product engineer, Tony Paes, who discovered 40 unused phones in the Plant Launch offices and 27 inactive lines.

Between them Tony and Dave have now returned 80 desk phones which have now been decommissioned-saving Halewood £7000 a year.

Speaking to On Track, Tony, said: “With most office-based employees embracing the new Teams era, you have to ask yourself the question, when was the last time you heard your desk phone ring?

“I personally couldn’t remember, and it seemed like a no-brainer to do a bit of investigative work to see how many desk phones were being used, if it could save the business some money.

“It took me less than an hour to uncover 40 inactive phones and make the call to IT to decommission them- so it couldn’t have been easier. The process is really simple and if one person from each department or office could do the same for their area, imagine the difference this could make?

Dave added: “Desk phones are costly to run and maintain at a time where we need to dial up cash savings in the business. We know lots of people are already making the switch to Teams but regardless of whether their phones are plugged in or not, if they are not decommissioned, we are still getting charged.

“Tony showed real initiative by scoping out which phones were going unused and we are calling on everyone else to do the same, so we finally say we have come to end of the line with this issue.”

“That’s why I am calling on everyone to help us by not only moving to Teams, but also ensuring that when they do, they go through the right IT channels to make sure their phones are fully decommissioned."