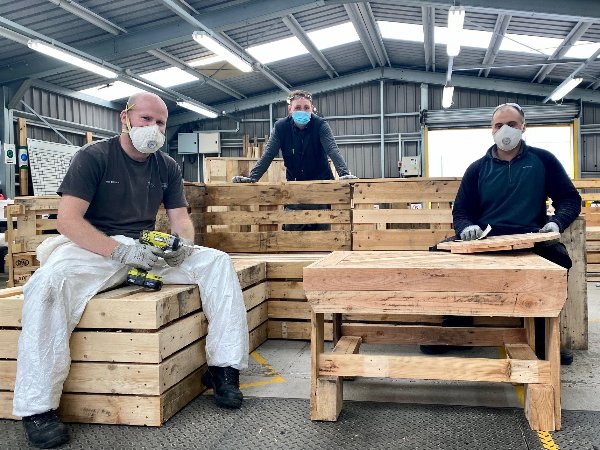 A few weeks ago, we launched Halewood’s first Grand Designs Project, which is on a DIY mission to give our factory an uplifting makeover and summer spruce.

This week, On Track caught up with some of our volunteers from Trim & Final, who have swapped pedals for pallets, to build some fantastic wooden furniture, to help revamp our outdoor rest areas.

The furniture has been created entirely from scrap materials found on site at Halewood- something that we would normally pay a supplier to remove and recycle for us.

Talking about why they chose to get on “board” with this interior’s initiative, Craig Radford, a production worker, from the North Works, in Trim & Final, said: “I used to be a bricklayer by trade before joining Jaguar Land Rover, so I’m used to building things and wanted to sign up as this was something a bit different to working on the line.

“It’s a great project to be a part of because we are upcycling our own resources to make the site a more pleasant working space for our teammates.

“It also makes you feel like you are giving something back as the new furniture means people will now be able and sit outside to have their breaks- which will make such a difference and that’s what it’s all about.”

Ant Davies, who works on the Rear Axel line, in Trim & Final, said: “Unlike Craig, I have no building or trade qualifications- I just enjoy doing anything DIY at home and have recently designed and fitted my own bathroom.

“I’ve learnt a lot by taking part, not just in terms of hand skills on the job but also problem solving as we have worked on the designs together as a team and have changed things if the materials weren’t right.

“So, for instance, we were planning to convert an old cable reel into a table, but because the wood had started to rot, it wouldn’t have been structurally stable, so we had to revise the original design. Instead of a table, we made it into a chair, which looks like it’s come straight out of Star Wars movie as it resembles one of the TIE Fighter ships- so that’s what we call it now!”

Dean Stevens, who works on T1 in Trim & Final said: “One of the things I’ve liked most about this project is the company has given us the creative freedom to come up with our designs, rather than just follow a plan, which makes a real difference, as we have all been able to put our own spin on things and take these ideas to the next level.

“It would be great to get more people involved and signed up to the Grand Designs project as everyone will have their own views on how we can improve the site and add value to our workspace. Imagine if we brought all these ideas together- between us all, we could make something bigger and better for Halewood- which is an exciting prospect.”

Mike Burton, jointing engineer at Halewood, who is overseeing the joinery Grand Designs’ project, said: “It’s been a fantastic effort by everyone in the team who have built brilliant bespoke furniture for everyone at Halewood to enjoy, and it’s cost us nothing.

“All this wood would have been thrown away and the team have combed the site for freebies and if it’s not nailed down or going in the bin, they have used it and between them have got through more than 100 pallets of wood so far.

Mike added: “The important thing to remember about the Grand Designs project is you don’t have to be a qualified tradesperson to sign up- just a willingness and enthusiasm to do something a bit different to your day job.

“Maybe like Craig, you do have experience of working in the building trade, and if that is the case, there is a real opportunity for you coach and mentor others who have a passion to learn something new.

We are looking for enthusiastic volunteers to get involved and refresh our rest areas, revamp our outdoor space and generally give the plant a good tidy up and some TLC.

We will continue to keep you updated on the success of the projects in future editions of On Track.

“It’s a great project to be a part of because we are upcycling our own resources to make the site a more pleasant working space for our teammates."

View more
4
Cardboard Recycling At Castle Bromwich Gets An Upgrade