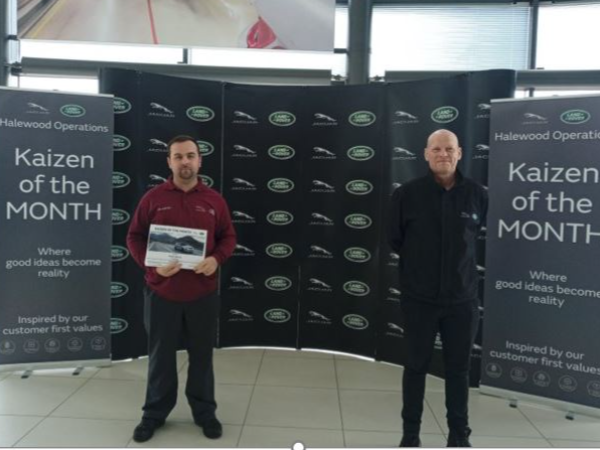 DRUM ROLL PLEASE: IT'S YOUR KAIZEN OF THE MONTH FOR APRIL!

Social distancing restrictions and the recent planned stop to production means we have some catching up to do with our usual Kaizen of the Month recognition event, but we can now unveil our anticipated April winner.

The coveted monthly Kaizen gong was scooped by Body in White’s (BIW) Phil McGlory who came up with an innovative idea to resolve ongoing “pallet pandamania” within the department.

Due to an increase in demand for extra door pallets, the BIW team had been making use of spare services pallets by introducing them into everyday service.

However, a problem soon became apparent. The door handlers on the service pallets weren’t catching properly with the door handles, which meant associates had to apply pressure on one side of them to make them latch.

This was causing over-cycles of work, as well as the loss of 20 doors a week, which had to be scrapped because of the damage caused by trying to locate the handler.

Working alongside the Kaizen team on B Shift, Phil, looked at what could be causing the issue and together they soon discovered that the header rail on the service pallets were not aligning properly with the footer rails. This was causing the door to lean into the pallet, so adjustments needed to be made.

Rather than contracting one of our suppliers to do it, Phil and the team did the job together in-house which quickly put an end to the issue.

As a result, their quick thinking has prevented up to 20 doors being scraped a week- a saving of £419 a month as well as saving 2-3 seconds saved on each cycle by removing the need to manipulate the door.

Cracking work Phil and to Kaizen team on B Shift which included Colin Bryan, Thomas Dwyer and Danny Murray.

Getting involved in continuous improvement so we can improve the quality and efficiency of our processes is how we can play our part in Refocus.