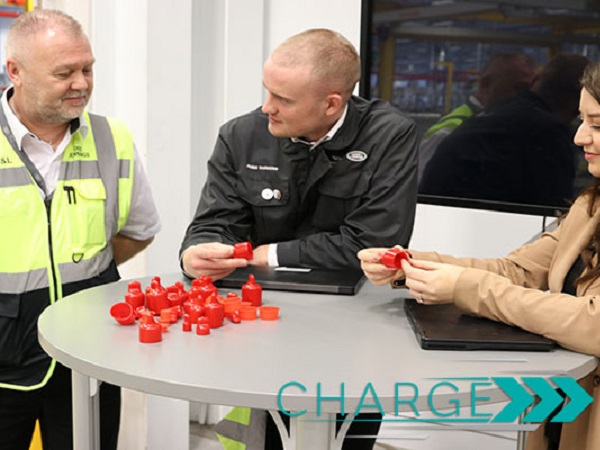 The Engine Manufacturing Centre (EMC) has found a brilliantly simple way of saving the business more than £500,000, thanks to a group of colleagues' environmentally-friendly efforts to cut down on single-use plastics and reduce waste.

Engines built at the EMC have single-use plastic caps placed on intake areas to avoid contamination and quality issues as they pass through the facility.

The problem is that these caps cost the business more than £500,000 per year and only have limited use, creating a significant amount of waste.

A team of determined colleagues at the site set out to do away with the plastic protective caps that negatively impact both our business and the environment. As a result, they have found a new and better way to protect the EMC's engines while at the same identifying a great opportunity to contribute to Charge savings.

They trialled and tested a number of possible solutions, but they settled on completely eliminating the need for the single plastic caps by covering the whole holding unit, which holds six complete engines, with a 100% recyclable bag, made from recycled material and fitted at the end of the assembly line.

This means there's no need for plastic caps as the recyclable bag does the same job of protecting the engines and ensuring quality is upheld.

The bags, which will be used from January 2020 onwards, are made from wholly recyclable materials unlike the plastic caps. This means that the team are doing their bit to save the planet and also saving the business money!

The cost of plastics caps on four-cylinder engines works out at nearly £1 per engine with six -cylinder engines costing more than double that. The cost of one bag to cover a holding unit which has six engines on it, however, is just £1.09 - with the added bonus that the recycled bags being used are cheaper than the virgin plastic option. This forecasts a total saving of £592,670 per year.

Josh said: “It’s been really effective to work alongside various departments to come up with this saving.

"It will have a significant financial impact on the business but also reinforces our commitment as a responsible business as we will be using recyclable materials.”

It’s been really effective to work alongside various departments to come up with this saving.

It will have a significant financial impact on the business but also reinforces our commitment as a responsible business as we will be using recyclable materials.