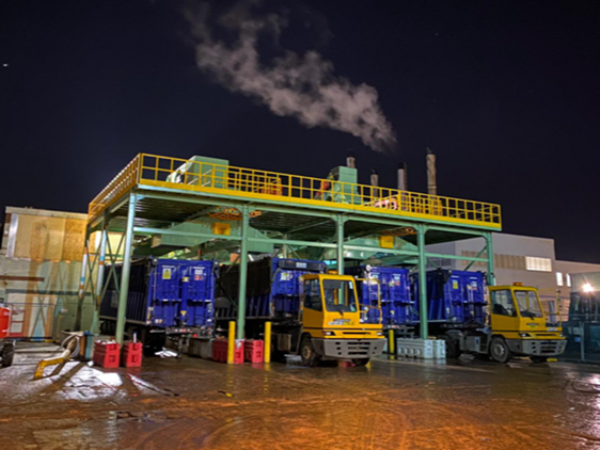 Whilst many of us spent the Christmas plant shutdown tucked up warm indoors indulging in mince pies and Quality Street- a rest was off the cards for Gavin Clark and Ian Kilgallen's teams.

Gavin, who heads up Manufacturing Infrastructure and Ian, lead Facilities Projects Engineer, along with their teams, worked tirelessly, around the clock, to complete yet another critical phase in Halewood’s Baler House Project.

This is a long standing project which will eliminate scrap metal Press Shop noise. Jaguar Land Rover Halewood is committed to being a good neighbour and after engaging with local residents and councillors over noise concerns, put the plan in place to provide a long-term solution to the issue.

Once completed, it will stop noise escaping outside the plant perimeter, by relocating the existing scrap system and encasing it within a new fit for purpose £1.7M building.

Before the project started in July 2020, scrap material would exit the plant via a chute on the Press Shop roof, dropping straight into a container below, a process which created a lot of noise which could be heard by local residents and became a cause for concern.

Over the Christmas shutdown, the teams were tasked with executing the next stage in the project, battling bad weather in order to relocate the first aluminium scrap conveyor.

A maintenance platform was then built around it and the steel conveyor (which had been relocated during Halewood’s summer shutdown), and a new automatic wagon conveyor system was put in place- which took just 26 days.

Speaking to On Track, Ian said: “This latest stage in the Baler House project came with incredible challenges, especially because of the extreme weather conditions the teams faced during the height of winter.

“Relocating a 40 tonne conveyor system and building outdoors whilst battling wind, sleet and snow seemed like an impossible task but they executed it brilliantly and within a very tight time frame.

“Their hard work and resilience meant there were no knock on effects or delays to production and the plant was fully operational when it opened its doors on 4 January.

“More importantly there were no safety incidents or accidents so we are incredibly proud of all of those involved who worked tirelessly over the festive season to get it completed including the Press Shop maintenance team who supported the project throughout the shutdown. A special thank you to Dave Roberts, Dave Carrington, Phil Bonny, Kelvyn Mantle, Dan Davies, Tony Griffin, Kyle McGreevy and Mark Atherton who played a big part in this.”

Gavin added: “They say everyone needs good neighbours and that philosophy is at the heart of what we are doing here. Halewood is committed to being a good neighbour and the work that has been delivered so far is testament to this.

“Each stage has resulted in a noticeable reduction in noise and we are on track to complete the project this summer which will offer a complete solution to this problem and demonstrates to local residents that we are fully invested in these relationships.

And it’s not just our neighbours who will benefit from the new Baler House which has provided the perfect blend, according to Gavin: “This is a great move for our employees as a lot of them have had to encounter the scrap noise themselves over the years as the old conveyor was in close proximity to the gate entry as they came on to plant-so I’m sure they will be looking forward to some peace and quiet themselves!”