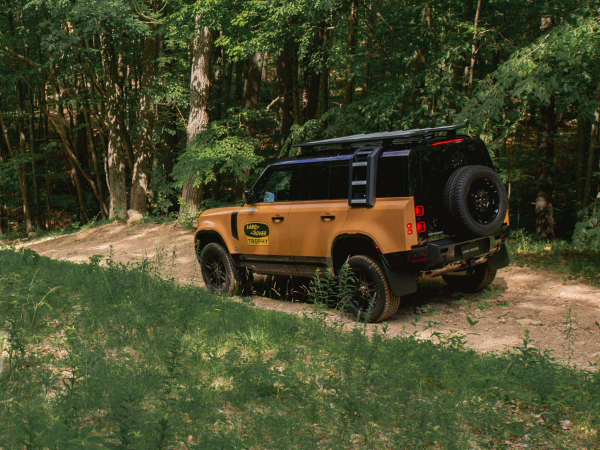 Continuing the expedition legacy of the original Defender, on 29 July, Land Rover North America announced a limited production Defender Trophy Edition with an adventure competition, held at the legendary Biltmore Estate in Asheville, North Carolina (N.C.) included with purchase. This is an opportunity for up to 90 teams to participate in a one-day off-road adventure in the Trophy Competition held at the Biltmore Estate in Asheville, North Carolina, starting from October 11, 2021. The overall winning team of the US Trophy Competition will go on to compete at an extreme adventure competition at Eastnor Castle in the UK the spiritual home of Land Rover testing and development, to take place early 2022.

Inspired by the Land Rover Classic Defender Works V8 Trophy, a limited edition of 25 re-engineered classic Defenders, the Trophy Edition carries on the same spirit of adventure for the North American market.

With 220 Defender Trophy Edition vehicles sold exclusively in the United States of America, each will come with an opportunity for a two-person entry to a one-day off-road adventure in the Land Rover U.S. Trophy Competition. Up to 90 teams (six waves of 15 teams maximum on a first come, first served basis) will compete at the legendary Biltmore Estate in Asheville, N.C. starting from October 11, 2021. Competitors will face a number of on- and off-road challenges, including physical and team building obstacles. Expert one-on-one coaching will be provided as part of the adventure, giving customers a unique opportunity to develop extreme driving techniques and skills in their own vehicle, before putting their training to the test.

The overall winning team, as determined by a judging panel, will go on to compete at The Land Rover Trophy Competition at Eastnor Castle in the U.K., the spiritual home of Land Rover testing and development, to take place early 2022.

“The Defender Trophy Edition evokes the spirit of adventure with an array of off-road accessories and special features created for the ultimate Land Rover enthusiast,” said Joe Eberhardt, President & CEO, Jaguar Land Rover North America. “We’re looking forward to putting on a memorable adventure competition for our Defender Trophy Edition customers that will not only put these vehicles to the test but will also create a special shared experience honouring the rich heritage of the Land Rover brand.”

The Defender Trophy Edition will be available this August, priced at $90,000 and can be purchased at certain Land Rover retailers in the U.S. To learn more visit landroverusa.com/defendertrophyedition