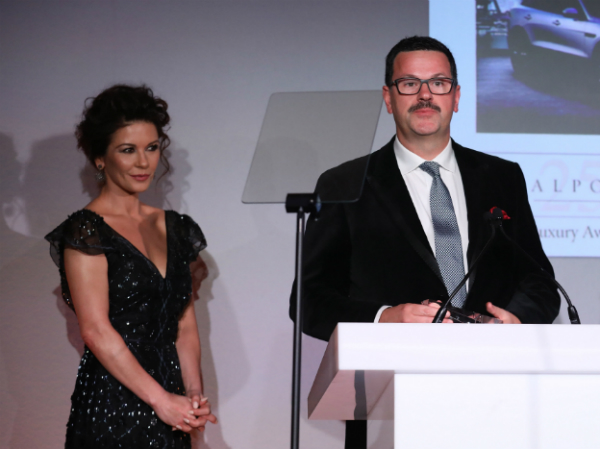 The Excellence in Exporting British Luxury award is presented every year by Walpole to the company judged to have been most remarkable in distributing British luxury goods and services overseas.

Jeremy Hicks, Managing Director of Jaguar Land Rover UK, said: “Our thanks to Walpole for this fantastic award and recognition for the continued success of our brands in the global luxury car market. We’re incredibly proud of Jaguar Land Rover’s distinctive heritage and position as the premier British automotive manufacturer. We not only deliver world class luxury vehicles to over 150 markets across the globe but also support over 40,000 families through employment.”

The award was collected on behalf of the company by Ken McConomy, Head of UK PR (pictured).

Walpole, a not-for-profit organisation which promotes British luxury brands, has been holding the awards since 2001, bringing together CEOs and creatives to celebrate what it is that makes British luxury the world leader it is today.

Helen Brocklebank, Walpole CEO, said: “It’s never been more important to recognise the towering contribution British luxury makes to the UK. The brands and individuals we celebrate tonight add to the cultural and economic richness of the British Isles through regional job creation; the simultaneous preservation of, and innovation in, making and manufacturing skills; a strong focus on export and, of course, their overriding creativity, artistry and passion.”

Winners were selected by an expert panel of judges from the luxury industry led by Michael Ward, MD of Harrods and Walpole’s Chairman; Gillian de Bono, Editor of FT How to Spend It; Hannah Rothschild, Chair of The National Gallery’s Board of Trustees; Stefan Sielaff, Design Director at Bentley; Marcus Wareing, Chef Patron of two-Michelin starred Marcus; Henrietta Jowitt, Deputy Director General, CBI; and Tim Delaney, Chairman of Leagas Delaney.

0
The devil is in the detail