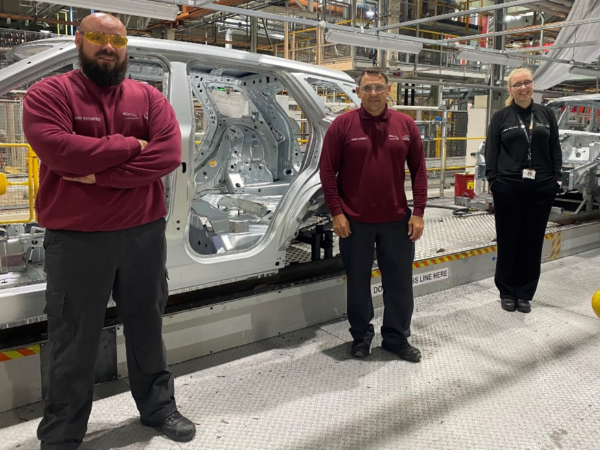 Last week, we unveiled the names of the Fantastic Five’ Halewood circles being fast-tracked to the TIC UK Recognition Activities, this autumn.

Representing Body in White (BIW) is Flash-ah ah- Gordon and we got the chance to catch up with team members: Abbigail Waldron, Chris Doughty and Danny Saunders, who told us more about their terrific theme, bringing Refocus to life at Halewood and what it means to them to get to the final stages of the 2021 TIC cycle.

Through taking part in TIC, the team has successfully implemented a new process which has significantly improved the surface finish quality on our cars as they exit the rework line in the Body Shop.

The problem was due to weld expulsion landing onto the surfaces of the metal body which is visible to the customer on a finished vehicle. Weld expulsion is molten metal escaping during the welding process (these are the sparks you typically see when travelling through BIW).

If there is weld expulsion on the metal’s surface, it means the car won’t have a smooth finish so needs to be sent through the rework line to sand off the expulsion, before it can be released to the Paint Shop- this costs our business time and money.

Abbie Waldron, Flash Gordon circle leader, said: “This was a real quality issue for the department, so we came together as a team and have set up a new process which has significantly reduced the incidents of dirt or contamination in the paint caused by weld expulsion.”

Asked how they did this, Abbie said: “We have modified a number of things including the positions of the welding guns, as well as looking at the welding gun tip alignment, tip dressing, sealer paths and panel gaps, so we can improve the weld process and find the root causes of the expulsion.

“We meet twice a week as a circle to do a review of the weld expulsion to see where we can improve and have already had some great results.”

Danny Saunders, production Group Leader, in BIW, said “Our idea is allowing us to be proactive not just reactive. It’s an ongoing process where we are working with other departments such as Maintenance, Production and Paint Shop to find a solution, rather than simply papering over the cracks.”

“Since we started our TIC theme, we have had a thirty percent improvement rate on our First Time Through (FTT) cars exiting the Body Shop and have more than halved the number of dirt in Paint calls in the Paint Shop.

“We have also had no WCPA audits calls for weld expulsion since setting up our process, where as in the past we could have up to four a week.”

“As there is now less weld expulsion work coming through to the rework line, this also means associates now have more time, so can get a better finish on the cars that come through- which further improves quality and FTT.”

Flash Gordon will form part of the 32 top circles who are progressing directly to the TIC UK Recognition Activities, later this Autumn. This will include a JLR off-road driving experience at Eastnor and they will also get the opportunity to present their TIC theme to a member of the Board of Directors.

Talking about his highlights of the TIC process, Chris Doughty, Group Leader in BIW, said: “For me, the best bit about TIC is the engagement that comes with it. It brings teams together to improve and solve issues that are affecting our business and the bottom line.”

“That’s why the results have been so good as it has allowed everyone to play to their strengths and skills.”

Asked if he was surprised when the team got through to the final TIC stages, Chris said: “We were quietly confident we would as the results have been good; we are all still actively involved in the process and felt the presentation to the judges went really well.

“We are now looking forward to the recognition event this Autumn and presenting to the Board of Managers -which is not something you get to do every day and a great opportunity for all three of us.”

Getting involved in TIC is a key way that employees can play their part in Refocus to improve the quality of our processes and ensure Halewood is in the strongest position to successfully embed the electric architectures earmarked for our plant.

11
A huge amount of PRIDE: Looking at the world from a different dimension