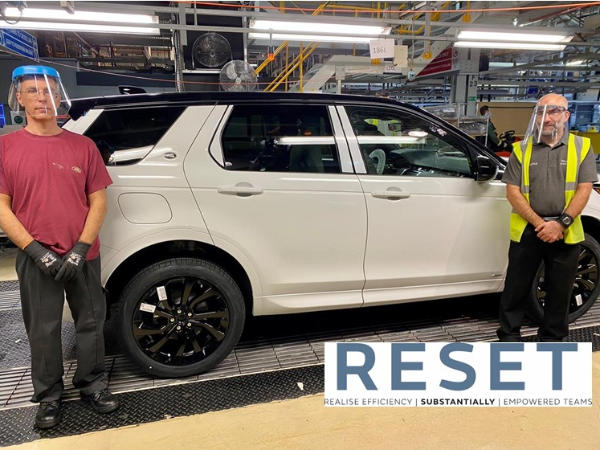 A team at Halewood have showed they have one foot on the gas when it comes to cost-saving initiatives after implementing a new petrol fill reduction programme which will save the plant £96,000 a year.

With all eyes on RESET and Charge + , the canny crew conducted a trial last month on 100 cars, which saw them lower the levels of petrol added at the Off Track pumps from 15 litres to 11 litres- bringing it in line with our diesel vehicles.

After its success, the programme was given the green light and has now been rolled out to all petrol cars manufactured at Halewood, the only exception will be for those made for the American and Canadian markets and PHEV vehicles.

Speaking about the project, Troy Little, Trim & Final CME Engineer, who was part of the team which drove home the changes, said: “Historically the petrol level at Halewood has been set at the 15 litre mark because there was a general misconception that when our cars left the plant, they were travelling more than they actually were.

“We were confident we could tidy up the levels so we did some investigative work through the inbuilt Connected Cars Ap, which allows us to pull data from our vehicles.”

Will Kerr, PVS Senior Analyst, who was also part of the project team, added: “The data we retrieved from the Ap showed us that once our cars had reached the dealerships, they were actually using less than 11 litres, so it was clear we were putting in more petrol than we needed too.

“Four litres might not sound like a lot, but it soon adds up and based on our 2019 volumes, this exercise has the potential to save the business £96,000 a year.”

Commenting on the teams’ efforts, Graham Miller, Launch Manager, said “Small changes can make a massive difference at a time when it is business critical out there.

“We have to challenge everything we have done before and ask ourselves is there a better, more cost-effective way of doing it?

“That is exactly what the team have done and by adopting a ‘Reset’ mind-set and questioning the ‘norm’, they have effectively eliminated a gas guzzling exercise which was resulting in unnecessary production costs and will help to safeguard the future of our plant.”

5
New Discovery Sport: Compact, composed and still as capable as ever