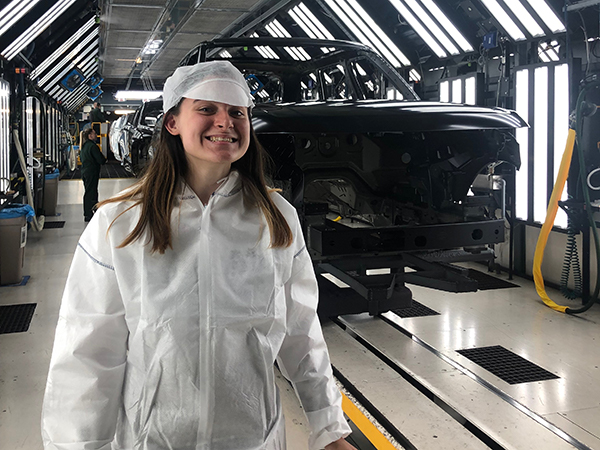 Gearing Up For Life

Two weeks of work experience with Jaguar Land Rover’s Corporate Affairs team at Solihull has provided me with new experiences and insight into the working world.

Watching a line of rivet machines in one of the body shops was, well, riveting!

It was my first glimpse into the complexity and sophistication behind the construction of Jaguar Land Rover vehicles.

In the next few weeks, I would learn about everything that goes on in a very busy Communications team at Jaguar Land Rover’s flagship plant. I was even able to look inside the Paint Shop which contains twenty-three kilometres of conveyors, dressed head-to-toe in a white net suit and hat, and watch the machines spraying final coats onto vehicles.

These opportunities to tour Solihull’s factories were just a few of the innumerable highlights of working with the company for two weeks.

Amongst others was attending the Mitch Evans colleague event at the Engine Manufacturing Centre in Wolverhampton. Employees were able to meet and take photos with a Formula E racing driver, who was for some a personal hero.

I also gained important experience conducting interviews with different people at Solihull, such as Jenna Peacock and a trio of teams preparing for the TIC convention, to be featured in People Talk magazine and On Track respectively.

Subsequently, I had the opportunity to proof the draft magazine which was to be distributed to all employees across the site. I thought it was so important that employees felt like individuals in such an expansive plant.

Working within such an enormous community invites the exciting and unexpected. I witnessed in one moment the handing over of the keys of a Jaguar I-PACE to a lucky competition winner, and the team dealing with a chemical incident on site and the following media response in the next.

Most of all, though, I enjoyed the time I spent in the office with the wonderful Corporate Affairs and Communications team, writing articles and being part of their fun, fast-paced world for a little while. I was made to feel welcome, useful and inspired.

An enormous thank you to Elliot, Rich and Laura for making my time here so invaluable.

Working within such an enormous community invites the exciting and unexpected.