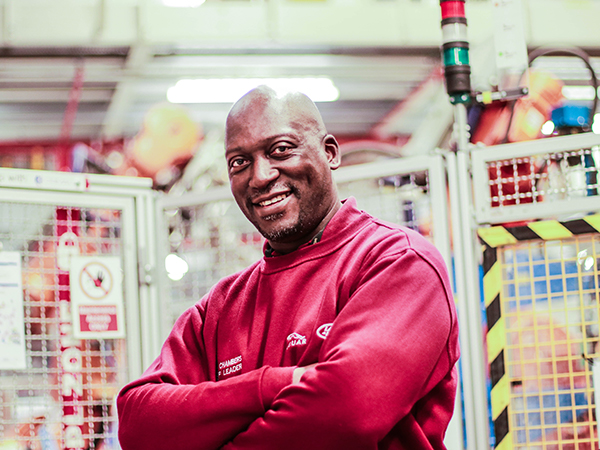 Colin Chambers signed up to be one of the first to experience the new Group Leader Academy, wanting to test out his skills after being a Group Leader for the past five years. Little did he know he was going to be the first Group Leader to graduate and act as an inspiration for Group Leaders across Solihull.

Colin has got Solihull running through his veins - specifically the Underbody area of our Body Shops! He transferred over from Longbridge in 1998 as an associate in Underbodies in Body Shop 1. Fast forward 30 years, Colin is now a Group Leader (GL) in Solihull’s newest Underbody area in Body Shop 3.

“I’ve been with the company for a long while now. I started as an associate and did the job for just shy of 25 years before Body Shop 3 was announced to be built. They were looking for people to take the step up to be a Group Leader, so I put my name forward,” said Colin.

“At the time I heard stories of GL’s across the site who had become GL’s but never got trained up to do the job. I naturally had reservations about putting my name forward, but after chatting to my wife, I went for it.”

At the time of building, Body Shop 3 was Europe’s largest all-aluminium Body Shop and part of a huge investment into Solihull which included FA2. To prepare for future models, newly appointed GL’s including Colin were given the chance to play a fundamental part in developing the facility. Colin explained, “My reservations quickly disappeared when we were brought over before production began so we could help with defining ways of working and training to lead teams.”

Skip forward to the summer of 2018. Colin had been a Group Leader in Underbody’s in Body Shop 3 for the past five years. “I was having a catch-up with my Production Leader, John Byrne who mentioned about the new Group Leader Academy being set up,” said Colin. “I had been thinking around the same time that since originally training as a GL, that had been it. It made me think twice about what I was doing and knocked my confidence a little.”

After chatting with his Production Leader, Colin applied via SuccessFactors and soon after found out he was going to be a guinea pig and one of 15 GL’s to be the first to pilot the academy.

The Group Leader Academy is a two-week course, which takes existing GL’s through everything they need to know to do their roles effectively. Over the next three years, it is planned that every GL will be given the time to complete the refresher course.

“I was made up when I found out I got a place but slightly apprehensive about what was to come,” explained Colin. “I didn’t really know many of the other GL’s when I turned up on the first day, so it was a case of getting to know each other at the start. The trainers from the IPS team were great and made you feel at home straight away.”

The new Learning and Development Academy at Solihull has been designed with interactive learning in mind.

Colin explained, “At times these courses can feel a bit like your being bashed over the head with a PowerPoint presentation, but this felt really different. It’s even got an Escape Room you spend time trying to get out of!”

At the end of the course, Colin and his fellow GL’s had to present what they had learned to Solihull’s Leadership Team.

“I would 100% recommend the GLA to any GL’s out there. It was challenging at first. You have to step out of your comfort zone and you have to put everything you think is right to one side. You learn how to do things differently but also why doing it differently can make your life easier.”

After completing the training, Colin and the other GL’s were asked to complete an evidence pack with how they are putting their new skills into practice.

At the beginning of April and working alongside his IPS coach, Sylwia Boczarska, Colin made his own piece of Solihull history by becoming the first GL to sign off his paperwork and graduate.

Graduation was made that little bit sweeter for Colin as the Underbody team then scored 100% in Brilliant at the Basics, one of the first areas in Body Shop 3.

“It’s been a whirlwind couple of weeks. There’s no doubt that what I’ve implemented from the GLA has played its part in helping the team achieve 100%. Thank you to everyone who has helped along the way.”

Has Colin’s story inspired you? If you want more information on how to get involved in the Group Leader Academy, please speak with your line manager or email IPSSOL@jaguarlandrover.com with any questions.