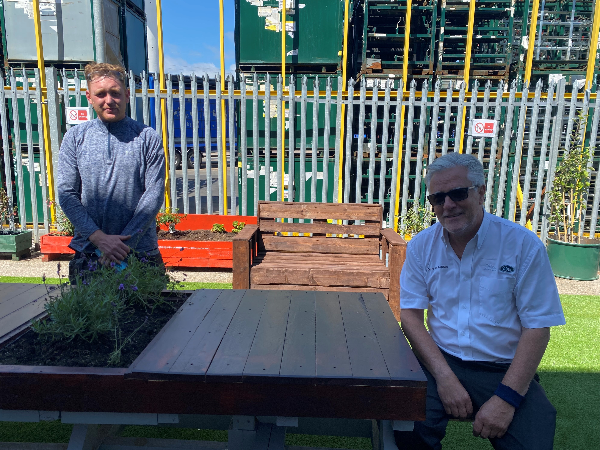 The Halewood Grand Designs project is on a DIY mission to give our factory an uplifting make-over and summer spruce and we have seen some incredible projects so far.

This week, we caught up with Grand Designs project lead, John Williams and volunteer joiner Craig Radford, who have created a new sensory table and outdoor rest area in the Northworks.

John said: “As you can see, we have lavender planted in the middle of the table and there is a special reason for that.

“Craig and I did some research into mental health and found some cognitive behavioural therapy studies, which state that if you can get yourself away from something that is troubling you and take your mind off what was causing you the anxiety- it’s as good as an hour’s rest.

“The idea behind the lavender is that you can touch it and smell it and it’s calming. If you come and sit in here later in the day, when the plants have been watered- it smells gorgeous, and it really helps to create an environment of peace and calm and is a safe space.

“We’ve also planted some Mexican Roses, Blossom, Honeysuckle, geraniums, lupins so it really is coming along now, and we’ve had good feedback so far.

Some of the Leadec team has asked to get involved and are growing some vegetables in one of the planters we’ve made and in return, have kindly offered to water the plants for us, so it’s a real team effort!”

Talking about the inspiration behind the sensory table, Craig said “We came across a large pallet of wood and wanted to convert it into a table but because it was so big, we had the space to do something a bit different, which is why we decided to place a sensory garden in the middle of it.

“That’s what is so special about this project as it’s developing all the time and going from strength to strength. All of the furniture is made from recycled materials which would have gone to scrap. So, it’s allowing us to apply that Refocus mindset-which has environment and sustainability at the heart of it- to everything we do.”