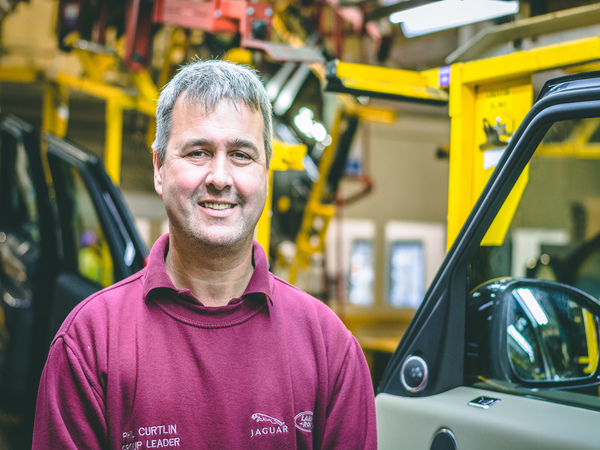 It was a Wednesday afternoon. Phil Curtlin, Group Leader on the Door Line in FA1 had just started his afternoon shift and was about to complete his team’s Work Group Brief. He was yet to know this was going to be a Work Group Brief with a twist - all because of his fantastic attendance.

In secret, a few weeks previously, Phil’s name was drawn out of the hat in the Motorvate lottery draw. Every quarter, Jaguar Land Rover looks back at the past three months of attendance scores and if they have improved by 0.25% or are over 97%, employees with 100% attendance over those months are entered in to a draw to win one of two cars.

Yes, you heard it right, if you have 100% attendance you could win a car!

As you can imagine, there were some gobsmacked faces in the team as Phil and his team realised what had just happened. Stunned Phil said, “I can’t believe it, what a complete shock! It’s nice to be recognised for when you come to work each day and that there is something else there for you for attending.”

Dave Owen commented on surprising Phil with the news he’d won a car, “The vast majority of people attend work every day. It great for us to be able to recognise these people such as Phil through the Motorvate scheme. Congratulations Phil.”

Gleaming with delight Phil continued, “We’re all here to do a good job and come to work everyday. This is just the icing on the cake and it really shows that good attendance pays.”

After being asked what he’s going to do with his new car Phil said, “I’m going to have a lot of brownie points with my wife now! Let’s call it a late Christmas present to her.”

Phil, a big congratulations and we hope you and your wife enjoy the car.

We can all play our part when it comes to attendance. By turning up each and every day you could potentially win a car like Phil. You have to be in it, to win it.