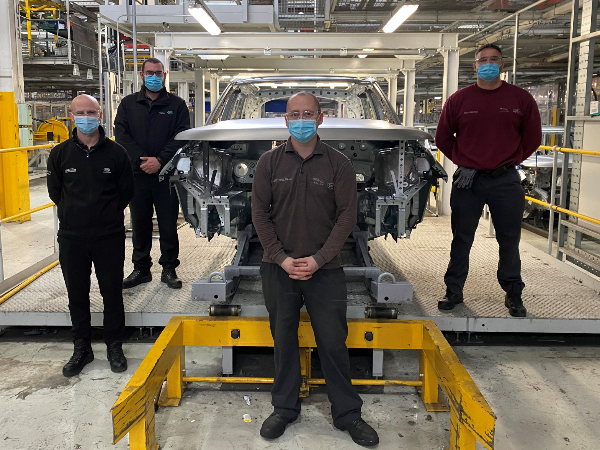 A team in BIW has seen its scrap savings go ‘through the roof’ after rolling out a new quality process which has significantly improved the laser braze defect fallout rate, on the fixed roof of the Evoque.

The laser braze is an automated cell which joins the roof onto the car. However, when there is a major defect in the braze process, the only option is a hot weld repair, which has a very low success rate due to it being difficult to weld certain parts of a car’s roof, without distorting the steel.

Despite the team’s best efforts, the only option after these failed attempts would be to send the car to scrap and last year, this cost the department over £55,000.

Not one to shy away from a challenge, BIW associate, Terry Callaghan, who is a trained welder, has created a new workstream process to improve the rework capability on the defected roofs.

This involves removing the faulty fixed roof from the car and replacing it with a panoramic roof, so the car no longer needs to be scrapped and instead can be made into a new customer order.

With the help of his group leaders and engineering teams, Terry also repurposed and developed a new rework area close to the Framing line, previously used for plant launch, so he could store and work on the defected units safely.

Terry said: “Before now, if the weld repair to the fixed roof was unsuccessful, the only option was to literally ‘bin’ the car. By this point- you are talking about £1500 in material costs alone, all down the scrap heap.

“However, after trying a few different things, I was confident that I could remove the defected roof and replace it with a panoramic roof. The process with a panoramic roof panel is much more successful, as you are effectively carrying out a shorter weld on a more structurally stable part of the car, which means I can still get a really good finish on it.

Terry added: “It makes me feel proud that I could utilise my skills and training as a welder to help the business make improvements to an existing process which has resulted in a substantial cash saving.

Ricci Loughran, group leader, who also worked on the project with Terry, said: “Terry has done a brilliant job as since we started in February, we haven’t had to scrap a single unit due to poor laser braze rework, which has meant we have avoided a scrap cost of £15,000 plus to the business.

“He has even thrown a few Kaizens in the mix too, making steps so the team can be over the top of the car when they are doing the reworks- which makes the process even easier.

“This is a brilliant example of going above and beyond at work.  Terry wrote the process from scratch, most of it at home and has been doing this on top of his day job. He has created a new process sheet and we are now rolling out training so that all shifts can successfully carry out the repairs.

“I’d like to say a special thank you to Darren Thomas who helped facilitate and drive the project, Wayne Bevin, CAR (Customer Acceptance and Release area) group leader, the leadership teams on B Shift and the engineering for this tremendous cross functional team effort.”

Quality is everyone’s responsibility and well done to Terry and the team whose quick thinking has helped to bring about changes to an existing process, which has not only resulted in cash savings for Halewood but will also allow us to secure a more successful sustainable future for everyone by reducing our plant’s environmental impact.

“It makes me feel proud that I could utilise my skills and training as a welder to help the business make improvements to an existing process which has resulted in a substantial cash saving."