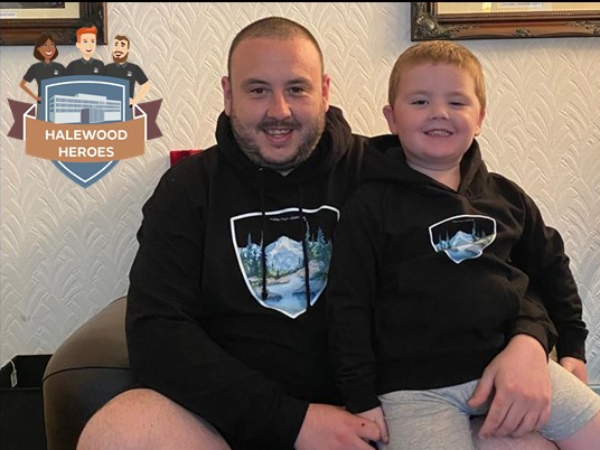 Halewood Heroes is back andthis week, we spoke to Scott Flannery who has been volunteering with his five year old son, Lincoln, for Helpfinder.

Helpfinder is a Liverpool based charity that helps people access local foodbanks as well as organise PPE, food and clothing donations for vulnerable people.

Scott, who works in Trim & Final, said: “My late uncle, Steven, is the inspiration behind my volunteering. He passed away eighteen months ago but was well-known for all his incredible charity work- especially everything he did to support foodbanks, which is why I wanted to get involved with Helpfinder.

“I’ve been following them on social media for the last few years and saw how stretched their services had become since the pandemic, which is why I wanted to help out.

He added: “When I’m not in work, you’ll find me driving around the city collecting food parcels, clothing and PPE donations which myself and fellow volunteers use to make up essential boxes that are given away to vulnerable people.

“We do this weekly from a pop up shop, which is set up outside Lloyd’s Bank, Bold Street, in Liverpool City Centre, every Sunday.

“As well as give away the boxes of essentials, we serve hot drinks and sandwiches and just as importantly, take the time to talk to people and offer our support in any way we can.

Asked how he is finding juggling volunteering alongside work and family life, Scott says: “I take Lincoln with me in the car when I’m out collecting the donations. Although we never actually get out the car- we open the boot and people place the items inside so we can keep ourselves as safe as possible.

“We tend to do this when I’ve finished an early shift so it’s a break for his mum from the home-schooling.

“Lincoln loves it and it’s really special to have that time together so I can teach him about the important work he is doing by helping others who are not as fortunate.

Scott added: “I’m so grateful to do be doing my bit and know my uncle would be incredibly proud and if he was with us now, I know he would be doing the very same thing.”

Just like Scott, we know many of you will still be helping your community where you can.  We'd love to hear about what you're doing and shine a spotlight on the charities you're supporting so please click here to share your story.