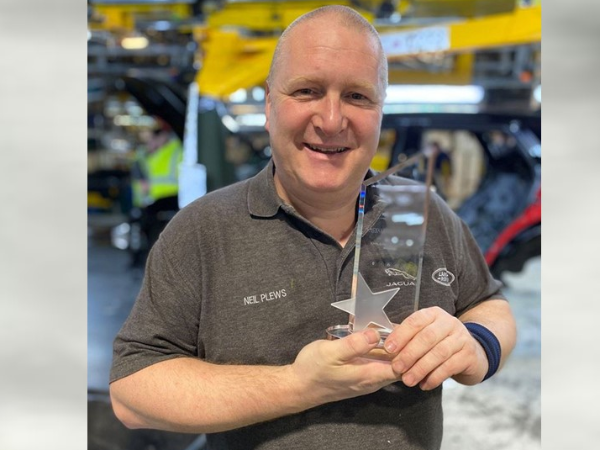 HALEWOOD'S EGG-CELLENT EMPLOYEE OF THE YEAR

Friday 6 March was certainly a night to remember for Neil Plews. Neil, who works as a Kaizen specialist, walked away with two Excellence Awards gongs, including the coveted Employee of the Year award and Spirit of Halewood.

You don’t have to walk very far on the shop floor with Neil before he gets pulled to one side by colleagues keen to congratulate him and there were even a few curtseys along the way.

As well as having a reputation for getting the job done, valued team mate and being an ‘all-round top guy’, Neil received a raft of award nominations for his incredible charity work.

Believe it or not, Neil has hand delivered over 8,000 Easter Eggs to Alder Hey Children’s Hospital over the last twenty years.

His wife works at the hospital which is why Alder Hey is very close to his heart. When he joined Jaguar Land Rover nine years ago, he had the cracking idea to extend his Easter egg collection to colleagues at Halewood- which has become somewhat of an egg extravaganza at the plant.

Last year’s Halewood collection reached a whopping 800 eggs- the highest number yet but Neil didn’t stop there as he and fellow team mates took part in a Dragon Boat Race which raised over £3000 for the children’s hospital.

Speaking about his award wins, Neil said: “I was lost for words and couldn’t believe it when they called my name out.

“I was nominated for an award five years ago but lost out to the amazing cycling scouser (aka Andrew Rogerson) but that’s OK as he would have got my vote anyway!”

Sadly, Neil lost both his parents earlier this year so dedicates his win to them. He said: “My mum and dad would have been so proud. Even though it’s still very raw, winning has given me a much needed boost after an incredibly tough few months, so I am very grateful to everyone who nominated me.

He added, “There is phenomenal people spirit at Halewood. Everyone is so generous and will always chip in for one another. Whether it’s buying Easter Eggs or throwing money in a bucket for a team mate in need- they don’t think twice about it.

“Over the nine years I've been here they have done a sponsored walk through Knowsley Safari Park, completed Santa Dashes, got soaked doing a Dragon Boat Race and donated selection boxes for Alder Hey. So these awards are thanks to each and every one of you that helped out- thank you so much.”

Mike Hughes, one of the many people who nominated Neil for his Excellence Awards, said: “Neil continually demonstrates ingenuity and attention to detail in a wide range of tasks in his role as a Kaizen specialist but he’s also blown most people away with his incredible charity work.

“He does this all in his own time and manages to get so many people on board with his fundraising which is why he is such a worthy winner and truly embodies the spirit of Halewood in so many people’s eyes.”

View more
0
THE HALEWOOD FOODBANK TAKE OVER IS BACK!