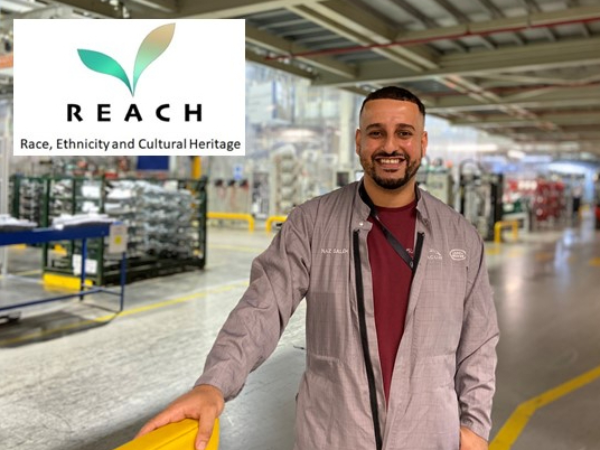 We recently caught up with Nasser Saleh, a Group Leader from Paint, who is part of the R.E.A.C.H (RACE, ETHNICITY AND CULTURAL HERITAGE EMPLOYEE) Network. The network wants to empower employees to R.E.A.C.H their potential. Previously called the B.A.M.E Network, the new name R.E.A.C.H reflects the network's inclusivity of employees from all racial and ethnic backgrounds and of all cultural heritages.

The network exists to create a more inclusive culture at Jaguar Land Rover by empowering under-represented employees of all ethnic and cultural backgrounds, ensuring they are represented and included in the workplace and have equal opportunities.  Nasser shares his experience with us…

Nasser has worked at Jaguar Land Rover for the past ten years, when he started, he was in his second year of university studying Business Management, but decided he wanted to be a little more hands on and instead started his journey in Halewood.  Since then though he has returned to his Business Management degree, he now studies in his spare time with the Open University.  It can be hard work at times, juggling work, his family and studying, but Nasser loves the challenge!

Nasser was born in Wales, but his family originally come from Yemen.  When he first started at Halewood, Nasser shared, “I was the only person in my area that was from a different culture, that is one of the reasons I joined the R.E.A.C.H network, because the plant is a big place, you just don’t always get to see other people, so it’s nice to have a place that people from all different cultures and backgrounds can get together and share their experience.”

For Nasser, it’s really important that he remains authentic to himself and his culture.  As a Muslim man, during Ramadan he fasts, something not all of his colleagues completely understood.  Nasser is more than happy to talk about it though and share his culture with others.  This has led to his colleagues helping him to celebrate the end of Ramadan by putting up a ‘Happy Eid’ sign in his area, which Nasser thought was a really nice gesture.

R.E.A.C.H has really helped Nasser feel that any adversity he has faced isn’t specific to his culture, telling us, “It’s really nice to share and learn more about all the other cultures that are part of the network.  We come to work everyday and see the same people, it’s important that we understand and help each other.  The different networks give insights into other people’s lives, we are all human and we need to stick together.”

For those of you who wish to use it, we also have a prayer room available, which is accessible from the shop floor via the stairs near the Bank ATM.