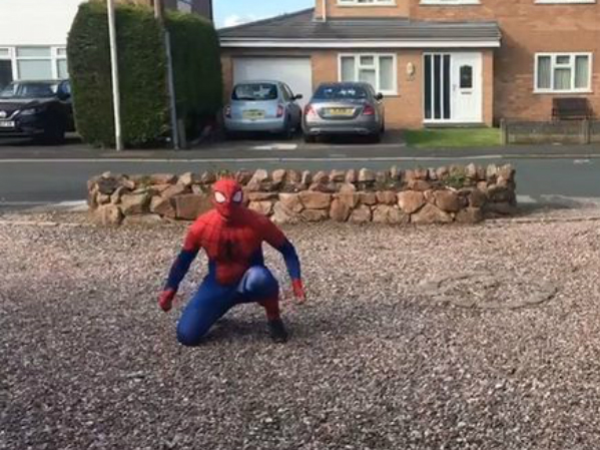 HALEWOOD’S RESIDENT SPIDEY RAISES OVER £5,000 FOR THE NHS

Our very own Halewood ‘superhero’, Neil Mercer, has raised over £5,000 for front-line NHS staff by running through his local town dressed as Spiderman, to cheer up residents during the coronavirus lockdown.

Neil, who works in BIW, decided to do his very own “lap for carers” after he surprised locals by going out for his once daily jog dressed as the mighty Marvel character and was later inundated with requests to repeat his ‘webtacular’ performance.

Neil said: “My mother-in law bought me the suit as a bit of fun, so I thought, why not go out for a run in it! I hoped it might cheer a few people up but could never have imagined the reaction I got after that first run- I was contacted by hundreds of people who wanted me to go past their house and wave at their kids and loved ones.”

Neil, whose two sisters both work in the NHS, then came up with the idea to do a planned 10 mile run through Widnes, to raise money for front-line workers, which he completed on 8 April.

He has now smashed his initial fundraising target of £1,000 and the total of money raised to date currently stands at £5,117.

Neil’s story has become a social media sensation and as has even featured on various news outlets, including Granada Reports and the Liverpool Echo.

Neil said, "I want to thank every single person who has pledged money towards me- it means so much that we are able to give something back to our wonderful NHS and all the people who are working on the front-line every day, keeping us safe.

You can donate to Neil's fundraising page here. A huge heartfelt thank you to Neil from all your colleagues at Halewood for your superhero efforts!

WATCH: See what happened when Neil visited a local colleague’s house to remind them to stay safe (Remember to disconnect from the VPN to watch)