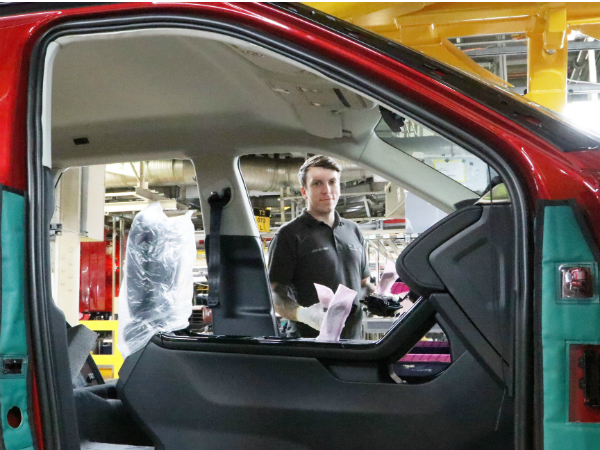 Altering your mind set to think about cost saving when you are so busy doing your day job can take a complete ‘shift change’ in thinking. One Halewood Associate in Trim and Final though has stepped up a ‘gear’ and done just that…

John Hayhurst works on Line 4 in Trim and according to his Group Leader, David Reid, he is one of those people who just doesn’t like to sit still.

“John is a good lad. When the line stops, even just for a few minutes, he starts looking around for things to fix, or tidy, or make better. He is always working on something.”

Inspired by #MyCharge and the recent drive by the business to save cash John has been tinkering with all sorts of things to help save costs in his station.

During a recent line stop John was examining the gear shifter assembly which he fits on our Evoques. He noticed that there were a large, neat stack of them in a box at the side of the line awaiting disposal. This got John thinking and he began monitoring the pile of gear shifters.

“At the start of shift each day I would find maybe seven or eight gear shifters, with their assembly mounting already attached, neatly discarded, but heading for scrap.

The shifters were fine but the mounting bracket had been cross-threaded and when that happens we can’t fit them into the car.”

The mounting bracket is a basic square plastic frame costing £2.58 each. We attach this bracket to the more expensive gear shifter part at the side of the Line 4. The combined cost for the two parts is £68.40.

David said: “John used his initiative and came up with a cost saving rework. It only takes a few seconds to do the rework and costs us just £2.58 to turn a costly scrap item of almost £70 back into a new gear shifter.”

David and John left instructions with their ‘oppos’ on the other two shifts to store any discarded gear shifters in a safe place each day for re-work.

John and David are now reworking around 20 gear shifters per week, a saving of more than £1,500 every five days of production. They have saved approx £18,000 in total now.

The team at Line 4 have now moved on to a new project to help improve the ergonomics of the mounting bracket fit station.

The aim is to reduce the number of gear shifters from being cross threaded in the first place, which they hope will eliminate the scrap cost altogether.

If you know of a cost saving initiative that we can feature in People Talk magazine and get the recognition it deserves then please email us at Halewood@jaguarlandrover.com.