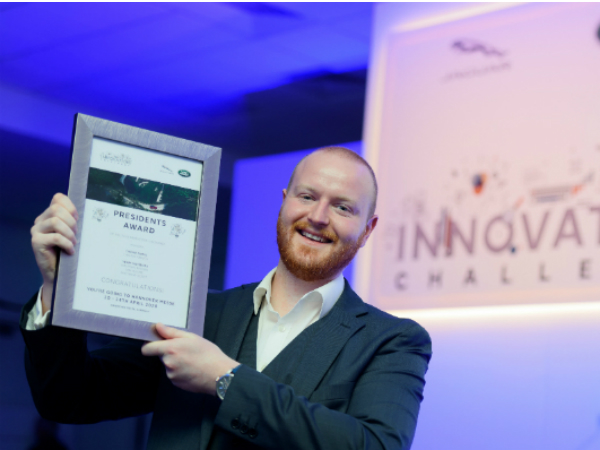 Here at Halewood we aren’t ones to brag….many of you do things every day that make a difference, whether it’s improving a process, cost savings or helping a colleague and we do it because we all want to make things better for ourselves and each other.

There are times when we should brag and be shouting from the rooftops and this is one of those occasions as we introduce the recipients of the first ever Innovation Challenge Presidents Award (2019):

The team is made up of project lead - Naithan Brown, Press Shop Production Associate / L46 Line Officer, Ian Hulme, Press Shop, Production Leader and Matthew Scott Press Shop, Higher Apprentice/Plan Engineer.  Between them they have over 27 years’ service with JLR and they certainly used all their experience and knowledge when coming up with their award winning (have we mentioned that?) idea!

A press line is made up of three major components; HOL, Press and EOL. The HOL is responsible for transferring a stack of flat blanks one at a time into the press. L46 sometimes struggles with double blanks in the head of line where the magnets aren't powerful enough to fan the stock, this results in unplanned downtime and excess scrap as double blanks get rejected from the line due to the potential damage they can cause to the tooling if they make it to the press.

The team decided to use the air knives fitted to the side of the fanning magnets to blast high pressure compressed air at the stock. Air knives work by concentrating air pressure compressed air through a nozzle directed at the small air gap created between two blanks by the fanning magnets. They aid separation by helping to overcome and break the surface tension of the lubrication applied to the blanks, which is believed to be the reason blanks stick together. The air knives can be selected; on or off, depending on the batch. This is possible through the addition of a series of isolators on the outside of the cell.

The team really wanted to take part in the Innovation Challenge as this was an issue they wanted to fix and they are always looking at ways to continuously develop and improve.  Naithan’s proactivity lead to him grab the project by the horns, and supported the maintenance teams by completing all of the work himself.  He was further supported by his supervisor for sourcing the parts needed, with engineering and maintenance linking the project with the PLC to improve efficiency. He was able to implement eight air knives in total for less than £500 and the project is set to save a mind blowing £50,000 a year!  Though this was a team effort, Ian and Matthew can’t give Naithan enough praise as he was the driving force for this project going so far!

The team loved the experience at the Innovation Challenge, telling us, “The event was eye opening and a really great experience.  We got to mingle with people that we usually wouldn’t get the chance to meet and we met Grant McPherson who took a real interest in all the innovations that were presented. The extra stands gave us a chance to get hands on and try a range of activities, as well as seeing some insightful demonstrations from some of our key suppliers.

Congratulations team – we’re all really proud of you here at Halewood!