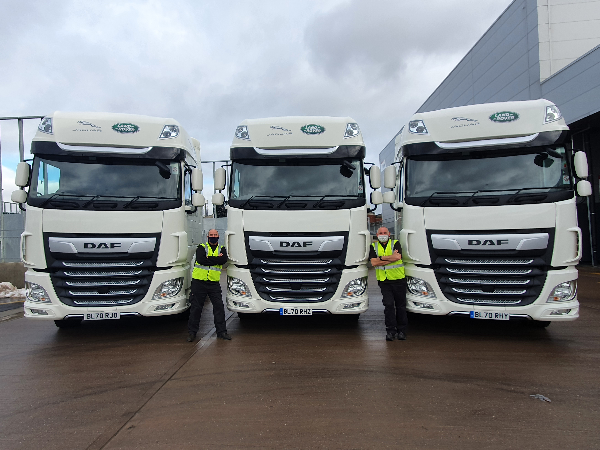 HAULING IN THE SAVINGS WITH THE CB INTERNAL TRANSPORT TEAM

Jaguar Land Rover’s internal transport fleet rode to the rescue recently after cutting out more than £20,000 of unnecessary costs to help with the transformation of K Block.

Plenty of you read this month about the transformation activity in the block to convert it into Europe’s largest pallet manufacturing facility as well as to support Manufacturing Engineering on their journey to becoming an internal support function for activities normally farmed out to external contractors at inflated costs.

Earlier this month we reported on the six-figure saving generated as part of the K Block racking project, using internal teams to dismantle racking in the block and then supporting the Solihull logitisics operation by relocating the racking to our sister site to help them avoid cost.

We didn’t tell you how it go there though…enter our internal transport fleet.

Logistics engineer Ray McGarry and his team were approached for help on how to transport the dismantled racking from Castle Bromwich’s K Block site across to Solihull.

The cargo included racking, sprinklers, barriers and various other materials that needed to be transported to Solihull so it could be reassembled there.

After external suppliers quoted more than £32,000 for a job that they said would take 130 return trips, the internal transport team managed to do the same job £20,000 cheaper and with more than 30 less trips.

The outcome not only resulted in a huge cost saving but also avoided 500 miles of travel and its associated carbon footprint.

Wayne Crook, a member of the transport team that delivered the project said: “The K Block move was just one of the many adhoc jobs we’ve completed over the past 12 months. With Covid disrupting our core work we put out a memo to other areas of the business that we had some scope to help them out with transport solutions if they needed us and we were astounded by the response.

“We had transport requests from over 20 departments including crash test, Land Rover Experience, SVO and various engineering and launch teams to name but a few.

“This has resulted in a total £570,000 save for all the departments we have worked for and over £115,000 net save to the company with our costs calculated in against contractor prices.”

0
Meet the TIC teams in Halewood