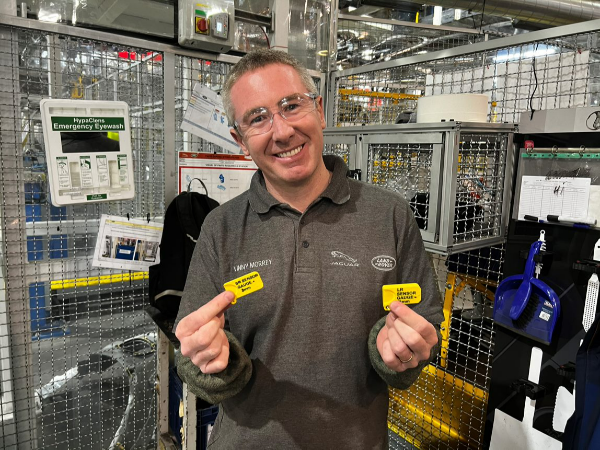 Congratulations to our latest Kaizen of the month winner, Vinny Morrey, from Body in White (BIW), who’s innovative idea has not only improved quality on the Bodysides and Framing Area but has the potential to save Halewood over £120,000 every year.

And the beauty of it … its simplicity.

Our load windows throughout BIW use sensors to detect the panels we load; however, large numbers of them were getting damaged as they were set too close to the panels.

With the number of sensors across all of the areas in Body Construction and the lost production time to replace them, not to mention the damage to the surface of the panels, combined costs annually could easily escalate to the region of £120,000!

However, as part of the Autonomous Maintenance roll- out, Vinny had an idea to place a gauge (designed and fabricated in-house) underneath the sensors, which acts as a barrier, so once the panel had been loaded, the gauge can then be removed.

By setting this gap between the panel and the sensor, this prevents damage as the range is set to the right distance, so means the panel can still be detected without making contact.

Talking about his terrific Kaizen, Vinny said: “It was an off the cuff idea, nothing special but I’m delighted that something so simple can make a difference to our quality performance.

Mark Hopkins, Vinny’s production leader, said: “Vinny is being a bit modest there as it was a brilliant idea. Not only does it improve our First Time Through, but also production and saves money as well.

“It’s great to see these ideas coming from the shop floor as our associates know their processes better than anyone and should feel empowered by the changes and improvements they can make for their workgroups and department through raising a kaizen.”