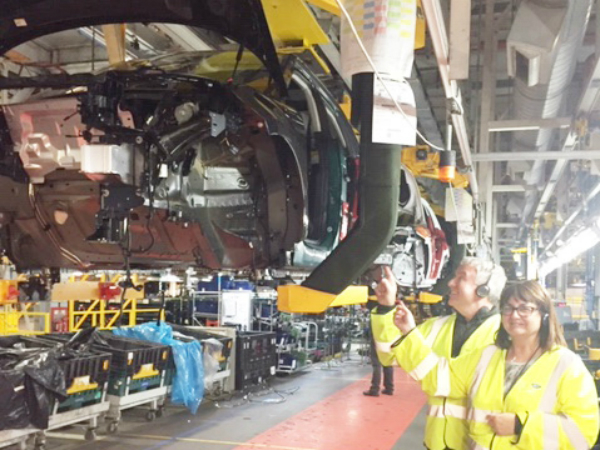 Halewood recently welcomed Jill and Chris Boam to the plant, who were visiting us to see their new R-Dynamic Evoque being built. It was a four hour round trip from their home in Chesterfield, Derbyshire, to get to Halewood but as we soon found out, that was nothing to them for their new Evoque!

As we sat down with Jill and Chris, Jill was busy eyeing up one of our Barbour dog coats for their Beagle, Monty. She laughed as she told us, ‘he’ll enjoy travelling around in style wearing that in our new car.”  Jill loves the style of the Evoque but that wasn’t always the case….

In their words it wasn’t love at first sight when they saw the original Evoque on the road.  At the time they were driving a Honda CR-V 4x4 but as the Honda’s shape changed and it was time to look for a new car again they had a closer look at the Evoque  and when they sat in one it was love at first drive, with Jill telling us, “the styling was much better in the Evoque, when I first sat in one it felt like a nice place to be and I’ve got to be honest it felt luxurious and blingy, which really appealed to me.”

This is when the love affair blossomed and after many happy years with their original Evoque the time came to get their next car.  Loving bling and luxury they couldn’t help but have a sneaky peak at the Velar which was the “definition of luxury.”  When they heard there was a new Evoque on the way they hoped it would have some of the design elements of the Velar and they were willing to wait…and travel!

They decided they wanted a look at the new Evoque as soon as it launched and managed to get their hands on tickets to one of the launch events in London.  They told us the event was spectacular, with dazzling lights, fireworks and much more, but that led to one problem – in the dazzling lights they couldn’t get a good look at the colour of the car, they felt it looked like the velar but they wanted to get a closer look and they weren’t willing to wait!

And so their mission to get up close to the new Evoque started, first heading to the showroom in Sheffield to have a closer at the colour they really wanted to see (Elite Grey) but when they got there they didn’t have an Evoque in that colour!  That didn’t stop them though – if anything they were more determined and the next day they headed to the Trafford Centre where there was an Evoque roadshow! Again, no luck, but they did meet a JLR employee who was really helpful, showing them all the features of the new car and found out for them the colour they wanted to see was in York!  So the following day off they popped to York where they got to see the colour up close!  They then went all the way back to the dealership in Sheffield where they got to do a test drive, which was brilliant and instantly made them want to buy the car….just in a different colour! Phew.

It’s fair to say after all that effort they can’t wait to get in their new car, with Chris desperate to play with all the new gadgets and Jill and Monty enjoying the luxury and the colour of their dreams!

We hope you have some fantastic adventures in your new car!