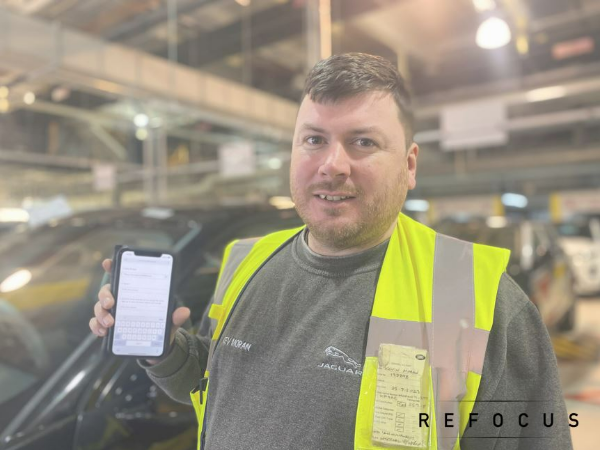 Our ingenious Ignite analysts have joined forces with the terrific team in Trim & Final to create a new process which makes it quick and easy for associates to submit their material cost saving ideas- all within a click of a button!

Ignite is a cost- saving project now embedded in Refocus Pillar Three and is focussed on driving down our Delivered Cost Per Car- which is the price it costs to produce one of our cars at Halewood.  To date, more than more than £26.5 million savings have been made at Halewood through the Ignite workstream.

The team have worked alongside Trim and Final Business Improvement Associate, Iain Carley, who has built a new Ignite function into the department’s existing Kaizen App- which he also designed himself.

Instead of filling in paper forms, associates can now submit their ignite ideas by scanning the Kaizen QR code, using any smart phone, and selecting the new Ignite drop down feature.

Once uploaded, it will be filtered to make sure it meets the relevant Ignite criteria and if it does, will be passed on to the Engineering teams to be progressed against the various GEARS stages.

GEARS is the acronym used to evaluate ideas against the different Ignite phases and stands for Generated, Evaluated, Approved, Realised and Set in stone-which is the final piece in the puzzle, when it can be actioned.

If the idea does not fit the Ignite criteria, it is then passed back to the Kaizen Team via the App, to see if it can be used by them - so the idea itself is never lost or wasted.

Project Ignite Analyst, Kevin Moran, said: “Before now, some associates were put off by the process, so this has made raising Ignite ideas more accessible for them. Rather than search the shop floor for forms, or coming to us to find one, they can now do it via the App- the same way they would do with a Kaizen.

And the new Ignite process is already proving a success, with Kev adding: “Since we shared the news with the associates in the Trim & Final 5-Minute Brief, we’ve had 30 Ignite ideas submitted through the App in just two weeks- which is really encouraging.”

They say the proof is in the pudding, so we spoke to Trim and Final Group Leader, Dave Owens, about his thoughts on the new process.

Dave said: “I’ve raised Ignite ideas in the past and it was frustrating as you would start filing in the form, then you would have to go back on the line, and nine times out of ten, the form would go missing, so you would have to start over again- so it would put you off.

“The morning the information was shared with us via the 5-minute Briefs, I raised an IGNITE idea there and then and it only took a few minutes using my phone.  I’m sure once word gets around, employees will be more likely to raise them now as it is much faster and efficient way of doing it.”

4
Walking the Walk With Paul Alcock

View more
1
It runs in the family