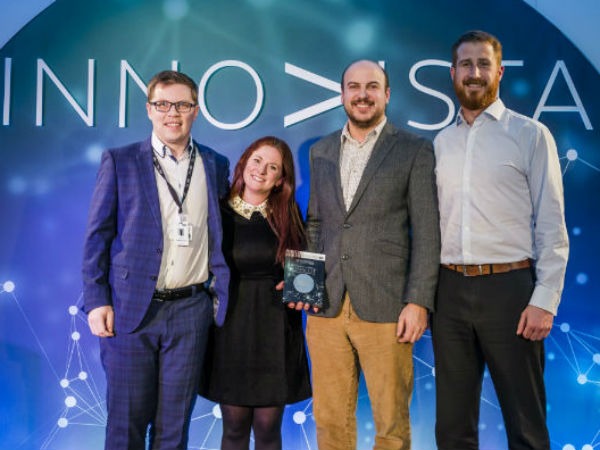 Colleagues from across Jaguar Land Rover gathered at the British Motor Museum to celebrate innovative ideas from every corner of the business at the 2018 Innovista awards last week. We spoke to the 2018 Rising Star award winner, Rachael Downes, of the Global Corporate Sustainability Team about her work in the circular economy.

Colleagues from across Jaguar Land Rover gathered at the British Motor Museum for the 2018 Innovista Awards earlier this month to celebrate innovative ideas from every corner of the business.

We spoke to the 2018 Rising Star award winner, Rachael Downes, of the Global Corporate Sustainability Team, about her work in the circular economy. This is about keeping resources in use for as long as possible to maximise their lifetime value, rather than following the typical ‘make, use, dispose’ linear economy model.

Rachael has worked at Jaguar Land Rover for five years, starting her career in an operational role, where she was responsible for nine different sites’ waste streams. When she moved to the Corporate Sustainability role, her aim was to build a tool or framework to help transform the way our business  manages and reduces waste.

“Team Improvement Circles gave me the opportunity to create this framework. It was with our coach Richard Streeton’s support that all of this became possible. It was such a large project that I needed help from people across the business, from purchasing, from waste, from sustainability. As a cross-functional team we came up with driving this framework,” she said.

After extensive research, Rachael and the team created a 14 step tool. “The idea was to make it as simple as possible, so anyone across the business in any department can pick it up and apply it,” says Rachael. “It’s not about having environmental knowledge, it’s about having drive and a determination to change something for the better. For me, circular economy is all about looking at a resource before it’s a thought in someone’s mind – it’s about preventing resource depletion.”

The team chose polyurethane as their sample waste stream, and after speaking to over 50 different companies, the ‘Waste to Wave’ project was born. Include short description of the specific project. The ‘Waste to Wave: delivering Zero Waste’ initiative itself was a finalist project at the 2018 Innovista awards in the ‘Implemented Innovations’ category .

“Waste to Wave was such an amazing project to showcase how the tool can be used to achieve zero waste, but in my mind we have to keep thinking about preventing resources being used in the first place. It is the perfect time to deploy the tool across the business – it is all about efficiencies, saving money and working smarter; really thinking and evaluating the way we work. The tool makes sure all internal customers are happy from a legal standpoint, and forces the user to question suppliers about working differently. By using technology we can remove the physical resource as it allows us to work smarter”.

For Rachael, winning the 2018 Rising Star award was a complete shock, as she never expected it. “At the awards after I read about the other two nominees, I honestly never believed I would win – they were both really deserving. I am so grateful. It was incredible to see how passionate Dr. Speth and Ian Harnett were, not just about the surfboard project but about the tool itself.

“I am so excited about the platform the award has given the tool. Since Innovista people from all areas of the business, all over the globe have contacted me about their projects, to get support and training. I’ve genuinely been passionate about the environment since I was a child, and everything I’ve done has been based around it. I feel like it’s going to really start happening now, and we’ll start changing the way we work!” she said.

For Rachael, waste is an opportunity for Jaguar Land Rover. It’s her goal to apply the tool to all our working, as standard practice.

If you have a project, please click here or email Rachael (rdownes@jaguarlandrover.com)

1
REFOCUS: QUIETLY PADDING IT OUT IN SOLIHULL'S FINAL ASSEMBLY 1