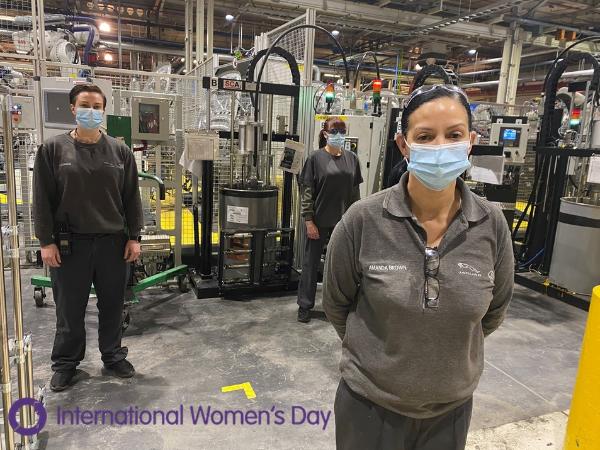 Today marks International Women’s Day and with this year’s theme being “Choose to Challenge”, we took this opportunity to speak to some of our female colleagues in the Halewood Underbody team, in Body In White, about their experiences of working in the automotive industry and any challenges they have faced along the way.

Paula Comerford, an Associate who works in Underbody, said:  “I’ve been at Halewood for 20 years and it’s a very different place now to when I started because times have changed and the world has moved on a lot.

“Back then, working on the line as a woman wasn’t the norm and I remember some of the guys telling me to ‘get back to the canteen’, as that’s where they thought women belonged, not on the shop floor with them.

“Comments like that weren’t easy to hear but thankfully I’m thick skinned and wouldn’t let prejudices hold me back from doing what I was good at. Fast-forward to now and this couldn’t be further from the truth. I am lucky to work with a really supportive bunch in Underbody and I don’t feel like a “woman”, I just feel like one of the team which is exactly how it should be.”

When asked, what advice she would give to other females working in the industry, Paula said: “When it comes to your career, gender shouldn’t come into, so always remember to stand up for yourself as these roles are for everyone and are there for the taking.”

Amanda Brown, also an Associate in Underbody, said: “I’ve been at Halewood for 15 years and just like Paula, it felt hard being accepted into a manufacturing role as a woman and I also encountered similar experiences to her at the beginning of my career.

“Luckily that feels like another world away to where we are now and I feel valued by all my colleagues and we are treated equally and respected for the jobs we do.”

Amanda added, “There is no denying the industry we are in is male dominated and there is still a long way to go, but over the last few years, there has been a real cultural shift to when I first started and it’s encouraging to see how far we have come as a factory.”

Kim Challis, Clerk in Underbody said: “I started at Halewood in 2008 and feel really lucky as I’ve always felt accepted and in my 11 years here, I haven’t felt discriminated against for being a woman, working in a predominantly man’s world.

“I think this comes down to who you work with and we are lucky to be part of such a supportive team where gender doesn’t come into things- you are just Kim, Amanda and Paula and that’s it.”

Asked what she thinks about International Women’s Day’s theme of “Choose to Challenge”, Kim said: “Everyone should always choose to challenge and stand up for themselves, regardless of whether they are, female, male or non-binary.

“I might be a woman but I’m not actually a big advocate of having days like today that celebrate female over male success or vice versa. We shouldn’t need a dedicated day to do this and I hope that in years to come, embracing people’s gender, talents and differences just becomes the norm, part of the everyday and we can all be happy and comfortable in our own skins.”