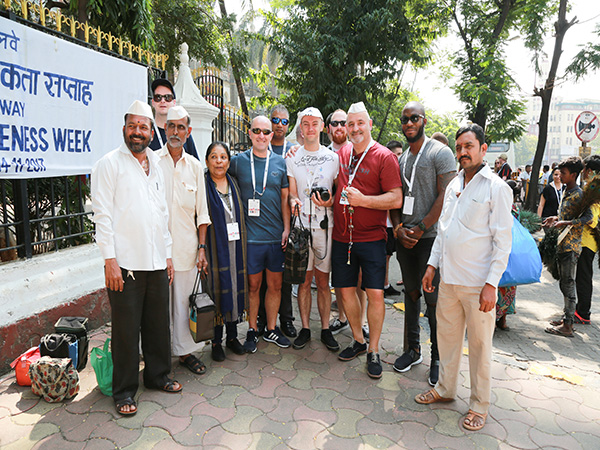 It's a Global Gathering for TIC

Headbangers, the EMC's winning TIC Team went on an incredible once in a lifetime, 4,000 mile trip to Pune. Here's their story...

In October. The Head­bangers from the EMC hopped on a plane to travel 4622 miles to India; final destination Pune, to take part in the second annual Global Team Improvement Circle Convention.

Joining the adventure were teams from across Jaguar Land Rover, repre­senting Halewood, Solihull and Castle Bromwich, as well as other indirect, non-manufacturing areas.

The event also welcomed, for the first time, a team from CJLR, our Changshu sister facility.

As the second largest city in India, Pune has the seventh largest populous in the country, with 3.1 million inhabitants. The city is described by Lonely Planet as ‘a thriving, vi­brant metropolis, a centre of academia and business that optimises ‘New India’, with its baffling mix of capitalism and spiritualism (ancient and modern).’

But first time to sit back, relax and unwind from the journey.

The view from the hotel was amazing, including be­ing able to see the historic Gateway to India; an arch monument built during the 20th Century, located on the Waterfront at Apollo Bunder in South Mumbai overlooking the Arabian Sea.

The evening meal was an opportunity to meet the Indian hosts and also catch up with the other teams.

CSR was on the agenda for Day Two, but first, a visit to the TATA management training centre in Mumbai, to hear more about the history and heritage of the company and its commitment to giving back to its local communities.

“Tata Group believes corporate social responsibil­ity (CSR) is a critical mission that is at the heart of everything that it does, how it thinks and what it is.”

Within walking distance of the training centre was a Tata-funded orphanage, where the teams were put to work on a number of projects and activities, including painting and decorating and refurbishment. It proved to be a great team building exercise, as teams bonded over a commitment to help those less fortunate.

Day Three and the Global TIC Convention dawned, with excitement and a few jitters. On arrival at the Pune facility, the teams got their first glimpse of the Lake House and con­ference area where they would be presenting their ideas. But before, they were able to take a guided tour of the local facility to see how it compared to their own home operations.

Luke said: “We were quite nervous, but had to wait right until the very end, to do our presentation. The Convention was split across two rooms, but the other room finished ahead of ours, which meant everyone came into see our presentation. All eyes were on us. It was a great opportunity to see what our colleagues from other countries were working on.

With the presentations complete it was time to relax and unwind and enjoy some food and live traditional music at the Lake House... Everyone was able to take in the atmosphere and reflect on what had been an incredible day.

The team’s final day was spent taking in the culture of Mum­bai. Accompanied by local guide visits to a traditional Indian market and shrines. It was then time to freshen up ahead of the celebratory last evening meal, with plenty of food, music and dancing.

Talking about their most memorable experience from the trip, Headbangers said: “Helping out at the orphanage was such a humbling experience, they had very little, but were still happy.”

Withmar added: “It helped us bond as a team and was a great way to see what other areas of the business are involved in.”

Luke continued: “Being part of TIC has been a great experience, not just because it resulted in a trip to India, but because of all the things that we’ve learnt along the way. It’s made us challenge the areas where we work and given us the incentive to keep wanting to improve.”

Withmar added: “Having a supportive coach to bounce ideas off and who would push us when we stalled was absolutely vital. TIC is a two-way commitment, teams need to do the work, yet there’s plenty of support if you want it. We’d like to thank all of the people who helped us.”

There’s still time to sign up and be part of a fantastic experience.

Click here to visit the internal TIC Page for more pictures and to watch a film from India.

0
THE BIG HALEWOOD “KAIZEN” SWITCH ON