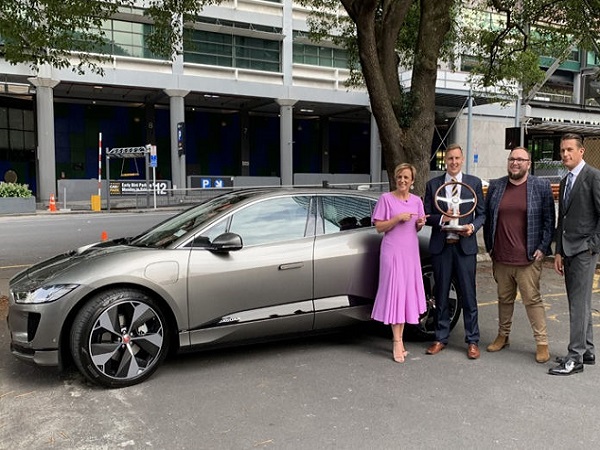 The Jaguar I-PACE has been named the 2019 New Zealand Car of the Year - the first time a fully electric vehicle has received the accolade.

Members of the New Zealand Motoring Writers’ Guild made up of over 20 professional journalists with specialist expertise in the automotive industry, reviewed and voted for the SUV throughout the year.

“We are delighted to name the Jaguar I-Pace as the 2019 New Zealand Car of the Year. With it already holding the 2019 World Car of the Year title, it is a real endorsement of our independent voting process.”

“The Jaguar I-Pace is an impressive car. Its unique design offers buyers the chance to have both a sports car and SUV at the same time, while also offering the latest in convenience and safety features.”

“The fact that it is all-electric with a very usable range is an absolute bonus. New Zealand is ideally placed with its huge share of renewable energy to make the most of the advancements in electric vehicles the new vehicle industry is providing us,” he says.

Robin Colgan, Managing Director, Jaguar Land Rover Asia Pacific says “Jaguar’s I-PACE is a stunning car, both to look at and to drive. It also happens to be fully electric. We are delighted that the 2019 New Zealand Car of the Year is a zero emissions vehicle, and we are very proud that it is a Jaguar that has reached this milestone first.”

Jaguar New Zealand General Manager Steve Kenchington says “the award caps off an exceptional launch for the new model which has been a pioneer in the premium EV category”.

“The acknowledgement from New Zealand’s Motoring Writing Guild members, a highly experienced group who have reviewed hundreds of vehicles from almost every marque available on the market today, is particularly gratifying for the Jaguar team at a local level,

“Today’s award is recognition of the hundreds of hours that have been invested by world-class engineers and designers in developing the technology behind the I-PACE,” he says.

The voting members of the Guild evaluated the I-PACE against a range of criteria including how the vehicle performs its intended role; its styling, interior design and accommodation; fit, finish and quality; ride and refinement; performance; road-holding and handling; value for money; active and passive safety and environmental responsibility.

The Jaguar I-PACE beat out nine other finalists in the New Zealand Car of the Year awards, including two other EV’s to take the top honour.