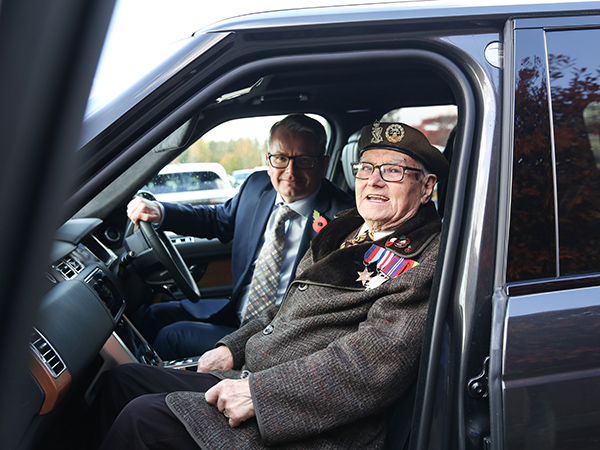 Earlier this week colleagues from the Jaguar Land Rover Armed Forces Community Network had the honour of accompanying 14 D-Day Veterans to the Royal British Legion Field of Remembrance service, held at the National Memorial Arboretum in Staffordshire.

Organised by the Royal British Legion, the event bought together D-Day veterans from across the Midlands who were last together earlier this year in June on the MV Boudicca ship bound for Normandy to mark the D-Day 75 commemorations.

Members of our Armed Forces network made up of our own Veterans, Reservists, Cadet Instructors and Military Families mobilised a small fleet of Jaguar Land Rover management vehicles to provide each D-Day Veteran with their own personal chauffeur experience for the day.

“Our D-Day veterans are all in their mid-nineties and most have mobility issues, so getting them to events like these can be big a logistical challenge for us,” said Jane Britton, Area Manager for the West Midlands Royal British Legion.

“I know that some of them wouldn’t have been able to make it along to today’s service without the kind support from Jaguar Land Rover. Both the cars and the companionship helped make the day very special indeed for our veterans and their families.”

Whilst we are delighted to have played our part in creating a memorable experience for them, everyone who volunteered on the day will assure you that the pleasure was in fact all ours.

Spending the day with these men and their families and hearing their stories was fascinating, heart-warming and humbling in equal measure.

One such story is described by the Operations Director at our new Battery Assembly Centre, Brendan Hindle, who himself served as a junior NCO with the Royal Army Ordnance Corps. Brendan left the Army in the early 90s and this year was shortlisted in the Ex-Forces in Business Awards for the Lifetime Achievement Award.

“I had the pleasure of picking up Albert Evans who went in on D-Day + 10 and fought all the way through to Germany,” recalled Brendan. “As we’d both served in Germany I was telling him how much I disliked the cold winters there.

“Albert told me about a particular cold snap he’d experienced and how he’d use leaves, straw and anything else he could find as insulation against the weather. I asked if that helped keep him warm in his sleeping bag and almost immediately realised my mistake. He looked at me with a smile and simply said, what sleeping bag? He shared lots of great stories with me all day but that one, I’ll always remember.”

Stewart Bailey was another of our Armed Forces Network on chauffeur duties on the day. He joined Jaguar Land Rover as a graduate in 2008 and works within our Trading Division. He’s also a Reservist in the Royal Corps of Signals and has served twice on operations. Stewart escorted D-Day Veteran and Legion D'honneur recipient Albert Price and his wife Betty.

“I’m bursting with pride,” said Stewart. “It has been such a pleasure giving this amazing couple the VIP experience. In my 11 years with Jaguar Land Rover and 10 years in the Army Reserve today will forever be up there as a highlight of both.”

Echoing Stewart's comments were Michelle Bunyan, a Business Planner and Events Co-Ordinator in Engineering Strategy and Training. Michelle joined the Royal Air Force Air Cadets in 2003 at the age of 15, and still serves with them today as a civilian instructor.

“I felt so lucky to be here today,” said Michelle. “I picked up Thomas and his son Colin and what a lovely pair they were. He told me many stories which I could have happily listened to all day. The magical moment for me was seeing how happy he was when we got there and he saw old friends. Everyone kept mistaking me for his granddaughter which made Thomas laugh, it felt so special to be part such an amazing day and I’ll treasure the experience for a very long time to come.”

Gregg Niblett, Manufacturing Manager at our Castle Bromwich Sports Car Facility, drove former Royal Engineer, 94-year-old Leslie Stocking. Gregg himself joined the Royal Engineers in 1990 and served in Germany, Bosnia, Canada and the UK before leaving to join Land Rover.  While there he joined the reserves, serving with the Royal Engineers until finally leaving in 2011. He volunteered at the inaugural Invictus Games, recruited our first Wounded, Injured, Sick service leaver in 2014 and helped set up the JLR Armed Forces Network as more service leavers joined Jaguar Land Rover.

Taking Leslie to the service was a poignant experience for both men, says Gregg: "Leslie was a former Royal Engineer the same as me so it was great to catch up with a fellow Sapper.

"He joined aged 17 in 1942 - the same age I joined. He landed on Gold beach on D-Day June the 6th 1944 and from there stayed with his unit pushing all the way through to Germany. I was really honoured to have the opportunity to meet a fellow veteran and talk with him about his time in the Corp during the war.  He even reminded me of our Corp Song “Hurrah for the CRE” (Corp of Royal Engineers) to which he still knew all the words."

Creating experiences that people love for life is what we are all about as a company, whether that’s through our products or the power of our people. Using our volunteers and our cars to solve a mobility issue and to provide these amazing D-Day Veterans with companionship throughout the day just seemed like the right thing to do.

The importance of communities coming together to reflect is hugely important and Remembrance at this time of year can be a difficult time for some as it is packed full of emotions and memories.

Those who took part in the day can be proud that they used their day to make someone else’s that little bit better.

As a Gold standard holder of the Military Covenant, Jaguar Land Rover has employed over 1000 people with military background since 2014. 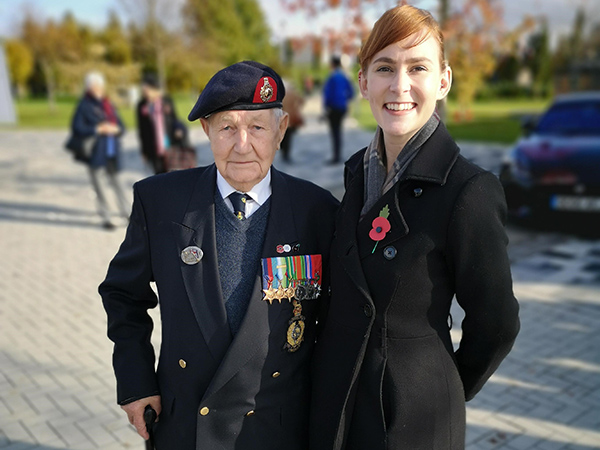 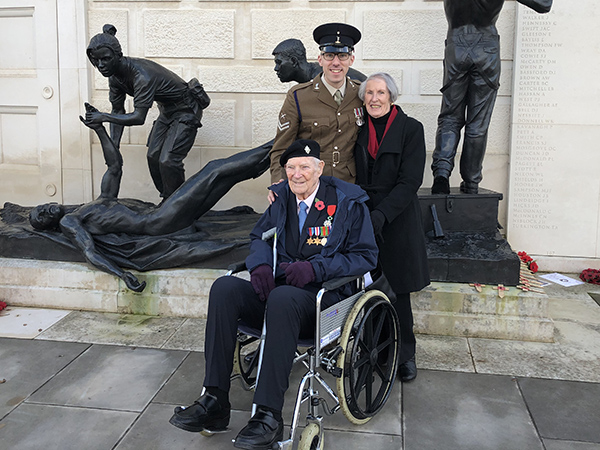 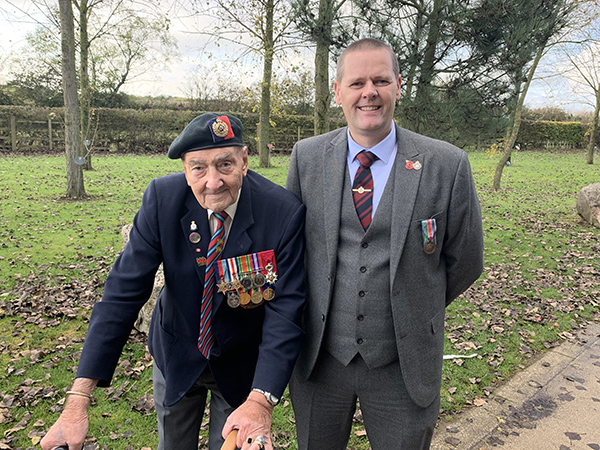 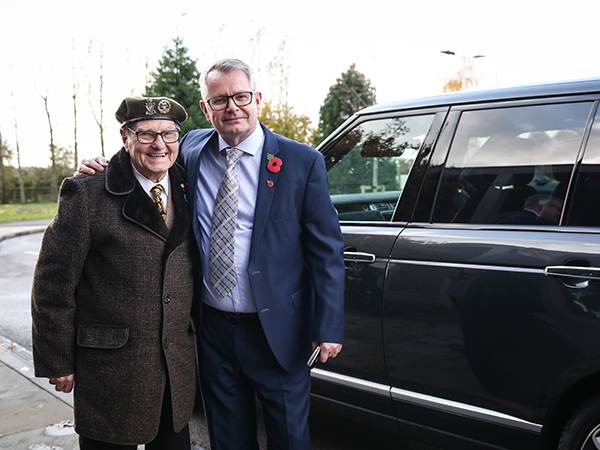 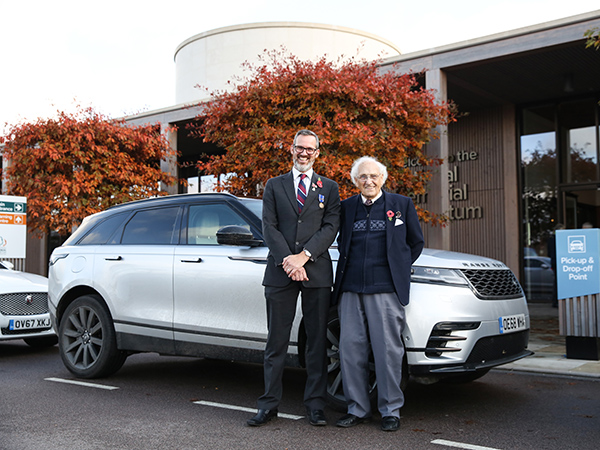 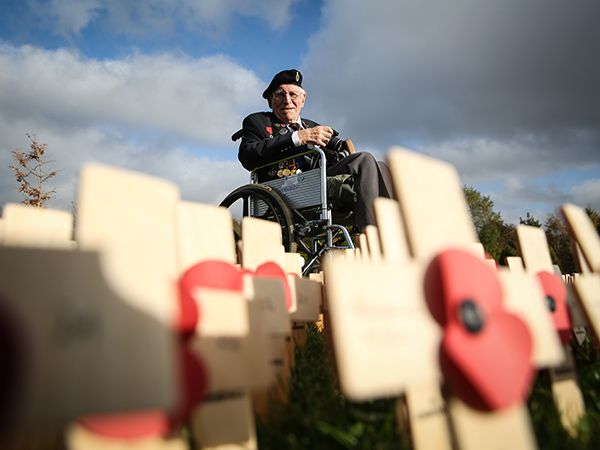 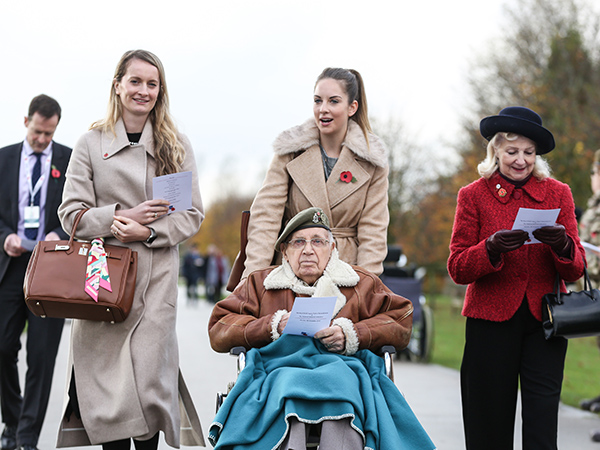 1
SCOTT IS PROVIDING AID TO ALL WITH NEW CHARITY